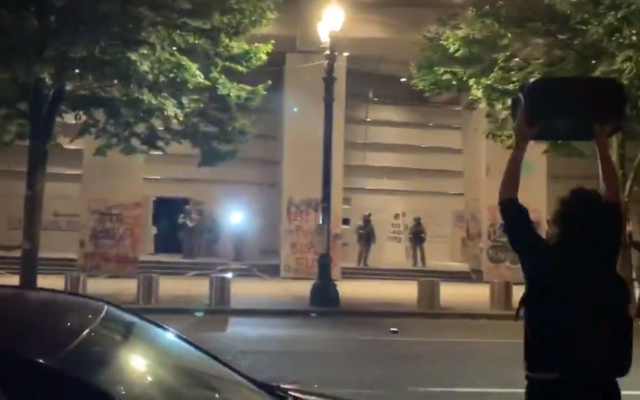 PORTLAND, Ore. — Local leaders are now reacting to viral video on social media that appears to show a confrontation between protesters and police on Saturday night July 11th outside the Federal courthouse in downtown Portland where demonstrators have been engaging in riots and protests for weeks now following the death of George Floyd.

The video shows police fire something at the protester who tries to kick it away.  Then he picks it up and tosses it back towards officers.  A second later police fire a second round.  You can see it hit the protester in the head and he immediately falls to the ground as people around him start screaming for a medic.

WARNING: The following videos include disturbing images of violence and injury.

This appears to be the moment that #Portland protester was struck in the head and suffered a gruesome injury. pic.twitter.com/Na1h5BUaAO

Another video posted by our news partner KGW shows the man losing a lot of blood after being hit.

On Friday, President Trump talked about deploying federal agents to Portland.  At an event, he told acting DHS Secretary Chad Wolf about the protests in Portland and claimed that local police couldn’t manage the protests themselves.  “It was out of control, the locals couldn’t handle it, and you people are handling it very nicely,” said President Trump.

My response to the federal troop actions in Portland (Thread) pic.twitter.com/k7xxcn1QHw