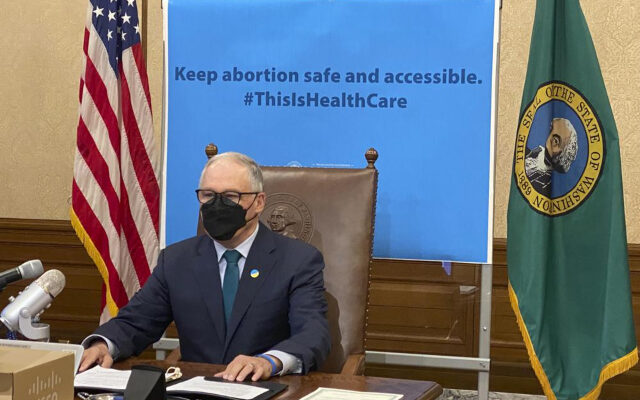 Washington Gov. Jay Inslee is seen before signing a measure that prohibits legal action against both people seeking an abortion and those who aid them, on Thursday, March 17, 2022, in Olympia, Wash. (AP Photo/Rachel La Corte)

OLYMPIA, Wash. (AP) — A Washington state measure that prohibits legal action against people seeking an abortion and those who aid them was signed into law Thursday by the governor, in a move designed to rebut recent actions by conservative states.

“We know this bill is necessary because this is a perilous time for the ability of people to have the freedom of choice that they have enjoyed for decades,” said Gov. Jay Inslee, a Democrat.

The bill signing comes just days after the Legislature in neighboring Idaho approved a bill that allows lawsuits by potential family members to enforce a ban on abortions performed after six weeks of pregnancy.

Conservative legislatures in several states have either passed or proposed new abortion restrictions in anticipation of possible changes to the landmark 1973 Roe v. Wade ruling from the U.S. Supreme Court.

Washington’s measure, which takes effect in June, prohibits the state from taking any action against an individual seeking to end their pregnancy or for assisting someone who is pregnant in obtaining an abortion.

The language is in response to a Texas law, which took effect last September, and which bans abortion after roughly six weeks of pregnancy and makes no exceptions in cases of rape or incest. The enforcement of the law is left up to private citizens, who can collect $10,000 or more if they bring a successful lawsuit against a provider or anyone who helps a patient obtain an abortion.

On Tuesday, Idaho’s Legislature sent a bill to Republican Brad Little that is modeled off the Texas law. The measure bans abortion after six week of pregnancy and allows the father, grandparents, siblings, aunts and uncles of a “preborn child” to each sue an abortion provider for a minimum of $20,000 in damages within four years of the abortion.

A handful of states have put forward similar legislation copying the Texas law, but Idaho’s version appears to have advanced the furthest.

“To the citizens of Idaho, if Idaho will not stand up for your constitutional rights, we will,” Inslee said before signing the bill.

If the U.S. Supreme Court overturns Roe v. Wade entirely, the decision on whether to keep abortion legal would fall to the states.

New Jersey recently became the 15th state to protect the right to abortion in state law, according to the Guttmacher Institute, an abortion rights think tank. A measure in Colorado has passed the House there and awaits action in the Senate.

Elizabeth Nash, a state policy analyst with the group, said that California, Connecticut, New Jersey and New York all have legislation pending related to preventing people from suing providers and supporters, similar to the new Washington law.

California’s Democratic leaders have pledged to make the state an abortion “sanctuary” for women living in states that might outlaw or severely restrict access to the procedure. Lawmakers have introduced a number of bills to prepare for the potential influx of new patients. One bill would let letting nurse practitioners perform abortions without the supervision of a doctor. Another would set up a fund to help pay for things like travel, lodging and childcare for patients seeking abortions – both within California and from other states.

Abortion has been legal in Washington state since a 1970 referendum. A 1991 ballot measure, also approved by voters, declared a woman’s right to choose physician-performed abortion prior to fetal viability and further expanded and protected access to abortion in the state if Roe v. Wade was overturned.

Carol Tobias, president of the National Right to Life Committee, said that regardless of what the Supreme Court ultimately decides, the recent laws in more conservative states show that lawmakers are prepared to continue to push for abortion restrictions.

“We have more pro-life people in elected positions that are trying to make a difference,” she said.

The measure approved by the Washington Legislature this month also updates state statutes with non-gendered references to a “pregnant individual” and grants specific statutory authorization for physician assistants, advanced registered nurse practitioners and other providers acting within their scope of practice to perform abortions.

Jennifer Allen, CEO of Planned Parenthood Alliance Advocates, said there was already an inadequate number of abortion providers in areas, and that with an expected influx from states like Idaho, the new measure will help meet that demand.