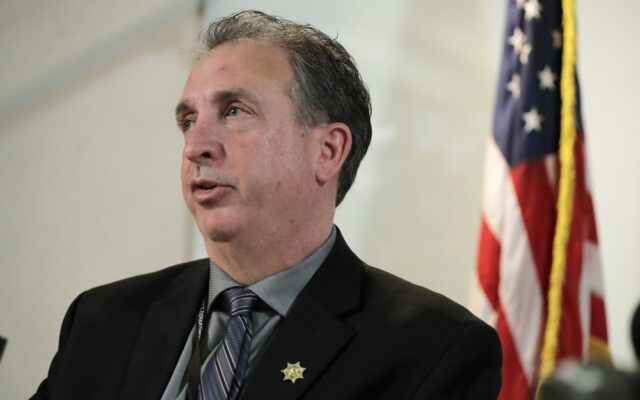 In this Feb. 18, 2020, file photo, then-Pierce County Sheriff's Dept. spokesman Det. Ed Troyer answers questions during a news conference in Tacoma, Wash. Troyer sparked a large police response in late January 2020 after confronting a Black newspaper carrier driving near his home, telling a 911 dispatcher the man “threatened to kill me.” The Seattle Times reports that Sheriff Troyer retracted that allegation upon questioning by Tacoma police. The 24-year-old carrier, Sedrick Altheimer, said the early morning encounter on Jan. 27 left him afraid and angry at Troyer — who was driving an unmarked, personal SUV and didn’t identify himself as law enforcement. (AP Photo/Ted S. Warren, File)

TACOMA, Wash. (AP) – Jury selection in a case accusing the Pierce county sheriff of crimes after his confrontation with a Black newspaper carrier has been delayed.

KING 5 reports a judge ordered Pierce County Sheriff Ed Troyer to take a PCR COVID-19 test Monday after a rapid test was faintly positive. The PCR test results were negative but Troyer’s attorneys said Tuesday he was diagnosed with Influenza A and wasn’t in court.

Jury selection continued Tuesday but was canceled for Wednesday and scheduled to resume next week.

Troyer has pleaded not guilty to false reporting and making a false or misleading statement to a civil servant for claiming to an emergency dispatcher the newspaper carrier was threatening to kill him.