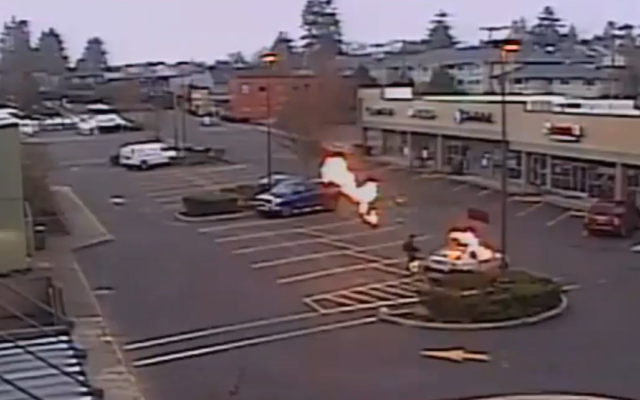 Washington County Sheriff’s Deputies are searching for a suspect they accuse of blowing up a car in Southwest Portland. Officials say several people called 911 just before 8 o’clock yesterday morning after seeing the car engulfed in flames in a Fred Meyer parking lot. The car was a complete loss. No injuries were reported.

Washington County Sheriff’s Office deputies and Tualatin Valley Fire and Rescue responded to the car fire in the parking lot of the Fred Meyer at 7700 SW Beaverton Hillsdale Highway. This is in the Raleigh Hills area.  It is part of the Enhanced Sheriff’s Patrol District (ESPD).

Multiple people called 911 to report a car was fully engulfed in flames behind the store. Deputies viewed surveillance video and it showed a subject walking up to the gas tank area of the car with something in hand. A few moments later, there was a large explosion. The subject backed away and the video showed the subject’s hand or arm on fire. The person was able to remove a burning item of clothing and walk away. The fire spread quickly inside the car, which was destroyed.

The surveillance video can be viewed and downloaded here: bit.ly/3hF5IWt

The arson suspect was wearing a dark hoodie, backpack, and dark pants. If anyone saw a person matching that description in the area at the time, or has information about this crime, they can call the Sheriff’s Office at 503-846-2700.