Violent Protests And Riots Nationwide Over Death Of George Floyd 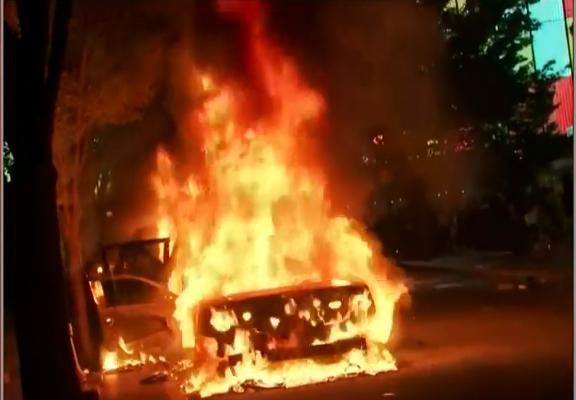 MINNEAPOLIS (AP) – Protests over police killings of black Americans have spread from Minneapolis to other U.S. cities. Protesters on Friday night smashed windows at CNN headquarters in Atlanta, set a police car on fire and struck officers with bottles. Large protests in New York, Houston and other cities were largely peaceful, even in Minneapolis, where thousands marched downtown as the city’s curfew ticked past. It comes after the officer who pressed his knee into George Floyd’s neck was arrested and charged with murder. Floyd was the handcuffed black man who died after pleading that he could not breathe. An attorney for Floyd’s family welcomed the arrest but said he expected a more serious murder charge.

Minnesota’s Twin Cities are now under curfew after days of protesting over the death of George Floyd. But unlike the earlier violence, Friday night ended with a peaceful and dramatic moment. Protesters in Minneapolis kneeled and chanted “hands up don’t shoot” at officers and National Guard members. They were all lined up outside a police station where the cop charged with murder was fired from. St. Paul is also under an overnight curfew this weekend.

U.S. Customs and Border Patrol says it dispatched a drone to Minneapolis following three nights of violent protests there but ended up sending it back to its base because the unmanned aerial vehicle wasn’t needed. The agency, which typically patrols the nation’s border and ports of entry, said the drone was going to provide live video to assist law enforcement in Minneapolis as they responded to protests that have left dozens of stores burned and looted. A CBP statement issued Friday says the drone would have provided “situational awareness” to local law enforcement. It said it routinely conducts such operations if needed to help other agencies or during natural disasters.

Police in riot gear are using pepper spray and making arrests as protests over George Floyd’s death turn violent in Atlanta. Some in the crowd attacked at least nine police cars, threw rocks and bottles, set fires, and even smashed windows at the CNN office. This all started peacefully but shifted within an hour. Military vehicles are now trying to push protesters back on a street as others make their way onto a highway. Many have been waving “black lives matter” flags. They’re demanding justice for the Minnesota man who was pinned down by a cop for several minutes before dying.