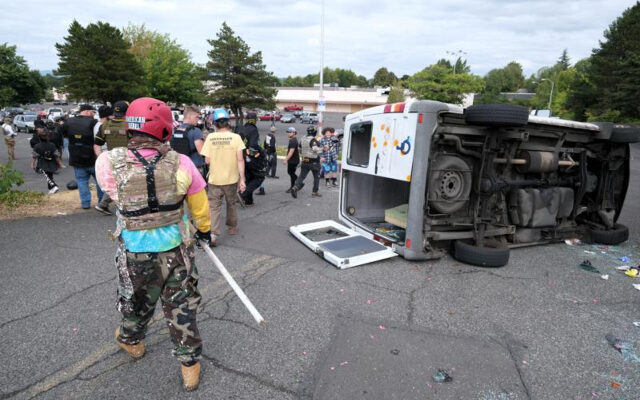 A van that was driven by anti-fascist protesters is pictured flipped on its side with all windows smashed after it was attacked for trying to drive into a Proud Boys rally Sunday, Aug. 22, 2021, in Portland, Ore. (AP Photo/Alex Milan Tracy)

PORTLAND, Ore. — There were rallies in Portland on Sunday afternoon between opposing groups that drew hundreds of people.

Police arrested and charged a Gresham man who they say fired several gunshots downtown near Southwest 2nd and Yamhill.  Video posted to social media shows the person firing a handgun from behind a garbage box.  There were no injuries.

Officers found the shooter at Southwest 3rd and Alder.  Dennis G. Anderson, 65, of Gresham, was booked into the Multnomah County Detention Center on charges of Unlawful Possession of a Firearm and Unlawful Use of a Weapon.  Police also seized a gun. 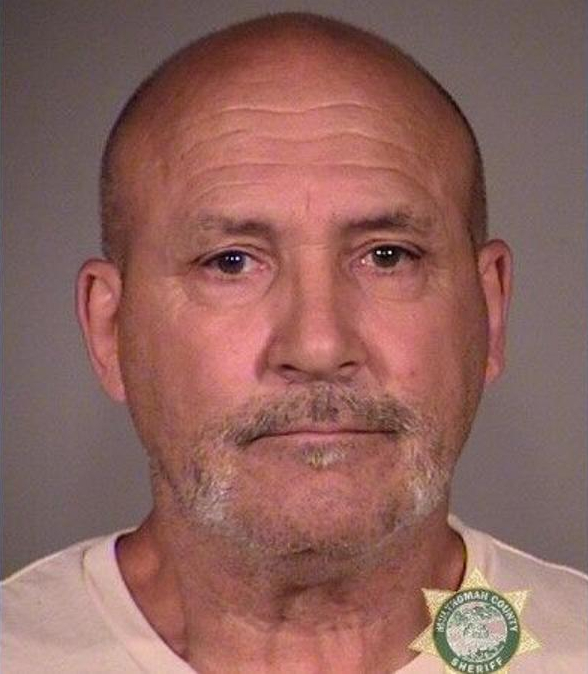 Earlier in the day, two different groups clashed in the Parkrose neighborhood.  There were clashes as the gathering was winding down.  A van drove into the parking lot where demonstrators gathered and ran off after crashing.  The crowd lit fireworks and other explosive devices.  Reporter Zane Sparling from the Portland Tribune was on NE 122nd Avenue when fighting broke out between members of Antifa and the Proud Boys.

The fighting began after a few counter-protesters walked into the shuttered K-Mart parking lot in East Portland where Proud Boys had gathered.

On Friday, Portland Police issued a press release from Chief Chuck Lovell saying: “You should not expect to see police officers standing in the middle of the crowd trying to keep people apart. People should keep themselves apart and avoid physical confrontation.”

In a statement on Sunday night: “While it’s disappointing that some people chose to engage violently, I am grateful for those who exercised their rights peacefully and without committing crimes,” said Chief Lovell.  “I also thank the Portland Police personnel who came in to work today on their day off, and those who were responding to calls for service citywide.”