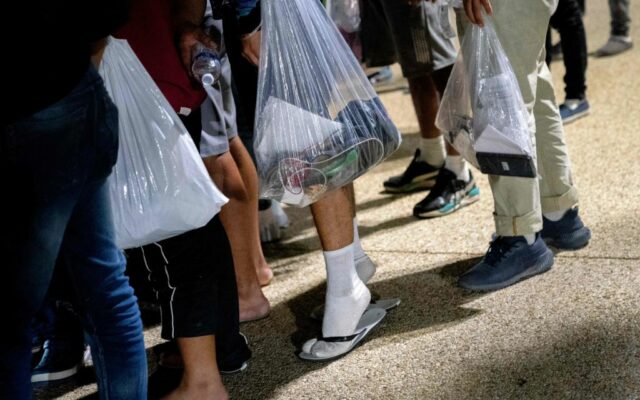 Migrants from Venezuela, who boarded a bus in Del Rio, Texas, hold their belongings in plastic bags after disembarking within view of the US Capitol in Washington, DC, on August 2, 2022. - Since April, Texas Governor Greg Abbott has ordered over 150 buses to carry approximately 4,500 migrants from Texas to Washington, DC, to highlight criticisms of US President Joe Bidens border policy. (Photo by Stefani Reynolds / AFP) (Photo by STEFANI REYNOLDS/AFP via Getty Images)

SAN DIEGO (AP) – The Biden administration has agreed to accept up to 24,000 Venezuelan migrants, similar to how Ukrainians have been admitted since Russia’s invasion. Meanwhile, Mexico has agreed to accept some Venezuelans who are expelled from the United States. The U.S. and Mexico announced the plans Wednesday. In a related announcement, the Department of Homeland Security says it will make available nearly 65,000 temporary work visas for lower-skilled industries, roughly double the current annual allotment. At least 20,000 of those temporary work visas will be reserved for Haiti and northern Central American countries.