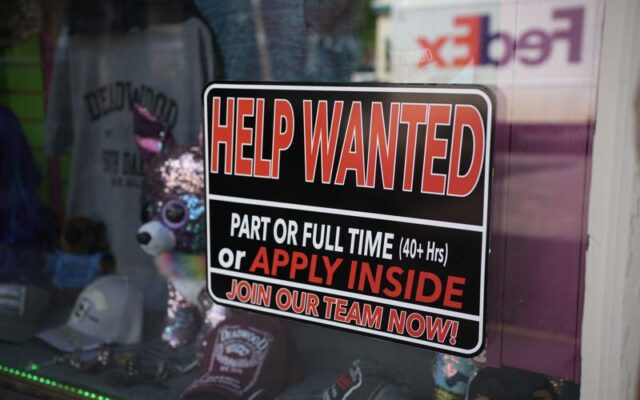 WASHINGTON (AP) — U.S. employers added a modest 559,000 jobs in May, an improvement from April’s sluggish gain but still evidence that many companies are struggling to find enough workers as the economy rapidly recovers from the pandemic recession.

Last month’s job growth was above April’s revised total of 278,000, the Labor Department said Friday, yet well short of employers’ need for labor. The unemployment rate fell to 5.8% from 6.1%.

The speed of the rebound from the recession has caught employers off guard and touched off a scramble to hire. The reopening of the economy, fueled by substantial federal aid and rising vaccinations, has released pent-up demand among consumers to eat out, travel, shop, attend public events and visit with friends and relatives.

“There is a gap between the economy and labor market,” said Nela Richardson, chief economist at the payroll processing firm ADP.

May’s job gains, she said, are “more lackluster than one would expect given the strong state of economic growth.”

Many large chains, including Amazon, Walmart, Costco, and Chipotle, have raised starting pay to better attract applicants. So have other employers: Wages jumped in May for a second straight month, a sign of companies trying to attract more workers. And the average work week remained elevated, which suggests that businesses are working their current staffs for longer hours to try to meet rising customer demand.

Yet even so, the number of people working or looking for work last month slipped slightly in May after three months of gains.

The bulk of last month’s job growth was at hotels, restaurant and bars, which gained 220,000 positions. Retailers lost jobs for a second straight month. And despite a hot housing market, the construction industry shed 20,000 jobs, its second straight month of cuts, likely reflecting supply shortages and soaring costs for building materials.

The economy expanded last quarter at a robust 6.4% annual rate, and economists envision growth in the current quarter reaching a sizzling pace of 9% or more. All that growth, driven by higher spending, has raised inflation fears. But for now, it has mainly propelled demand for labor.