Portland, Ore. – Update: We are expecting a police report to be filed today over the Harvey Scott statue being torn down at Mt. Tabor Park in Southeast Portland.
KXL’s Jacob Dean reached out to police for an update to find out if there are any leads on who may have vandalized the statue, or if there was anything more they could tell us. At the time they said no police report was filed yet, and we should reach out to Portland Parks and Rec. They declined our request for an interview but gave us a written statement saying a report would be filed. Parks and Rec believes public art and access to art is an essential component of the city. It turns out the statue is owned by the city of Portland and was maintained by the Regional Arts and Culture Council. Crews removed the damaged statue and now have it in storage.

They also pointed us to a move by the Portland City Council back in mid-June, where officials adopted six core values to guide city operations and it’s what they use to maintain public art and monuments. Those values include things like anti-racism and equity. Read the statement from Parks and Rec here:

We appreciate the interview invitation but no thank you. The toppled statue was discovered yesterday morning. If it has not yet been done, a police report will be filed today. It looked like one arm was missing from the statue and it may have other damage from when it was removed. TBD.

Portland Parks & Recreation (PP&R) believes that public art and access to art is an essential component of who we are as a City.

The City of Portland owns the statue in Mt. Tabor Park. It is maintained by the Regional Arts & Culture Council (RACC). A City crew removed the statue from the park and is storing it. The City will work with RACC to determine next steps.

On June 17, 2020, City Council adopted six core values to guide City operations: anti-racism, equity, transparency, communication, collaboration, and fiscal responsibility. These values will also drive RACC’s, and the City’s work to maintain public art and monuments. This work is an important part of our critical national and local conversations about systemic racism and racial injustice.

FM News 101 KXL reporter Jacob Dean checks out the damage done to the Harvey Scott Statue on Mt. Tabor in S.E. Portland sometime overnight Monday or early Tuesday morning October 20th, 2020.  Some workers at the site this morning were saying the Wikipedia page for the Harvey Scott statue was edited to say the statue had been toppled.

Here’s the lead line from the article that was altered: A bronze sculpture of American pioneer, newspaper editor and historian Harvey W. Scott (1838–1910) by Gutzon Borglum, sometimes called Harvey Scott or Harvey W. Scott,[1] was installed on Mount Tabor in Portland, Oregon, United States, “until being toppled in October 2020.”

It also appears whoever torn the statue down may have also tried to tow it away, but was unsuccessful.  One arm of the statue appears to have been broke or cut off.

Harvey Scott was famous for being the editor of The Oregonian newspaper for 40 years.  He was a well-known conservative at the time, who opposed his sister, Abigail Scott Duniway, on women’s suffrage.  It’s unclear why the statue was torn down and who did it. It’s the latest of at least five different statues that have been torn down in Portland so far this year.

Demonstrators have pulled down statues of Theodore Roosevelt and Abraham Lincoln this month, and previously attacked statues of Thomas Jefferson and George Washington. 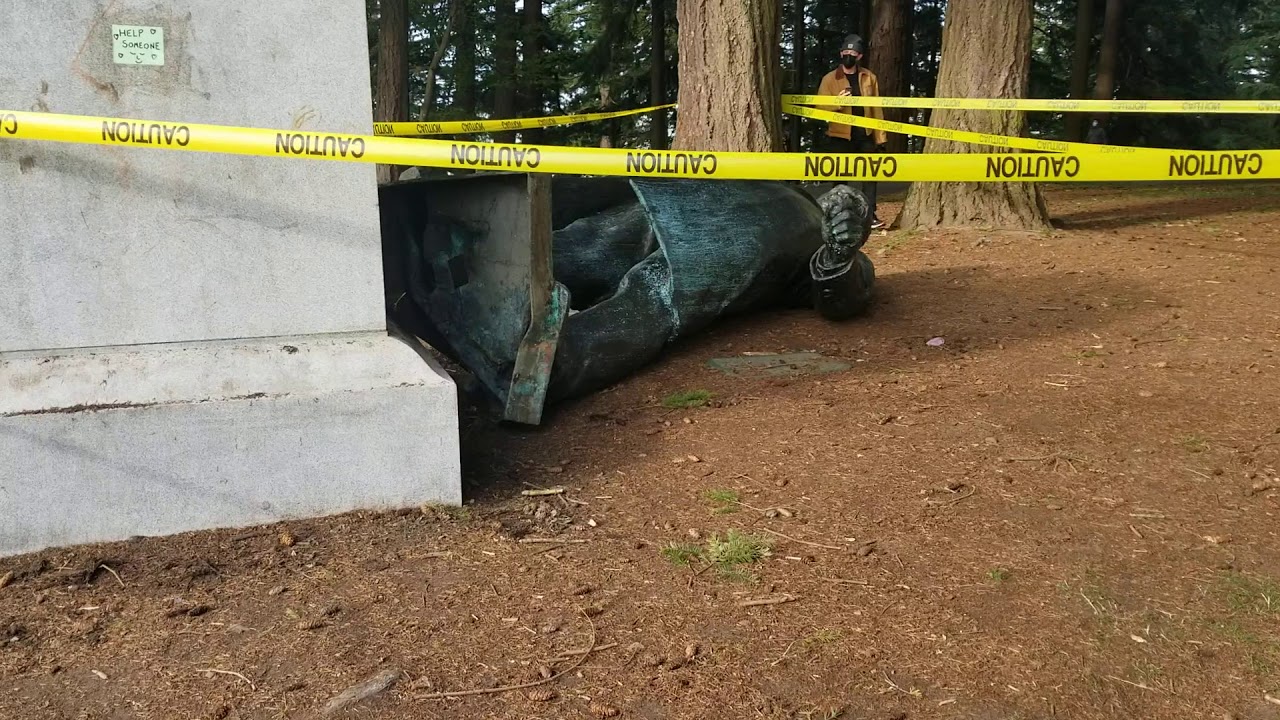