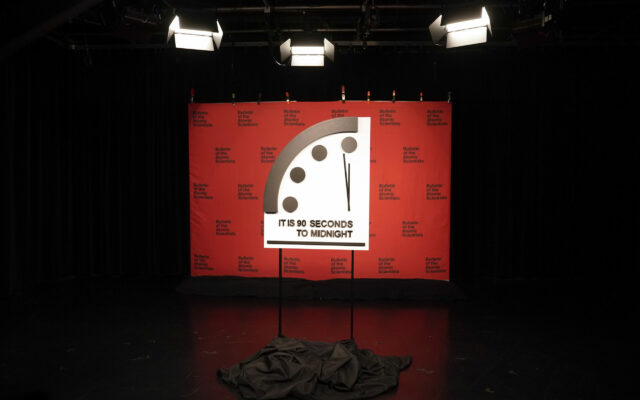 The Doomsday Clock stands in a broadcast studio before a virtual news conference at the National Press Club in Washington, Tuesday, Jan. 24, 2023. The Bulletin of the Atomic Scientists announced that it has moved the minute hand of the Doomsday Clock to 90 seconds to midnight. (AP Photo/Patrick Semansky)

WASHINGTON (AP) – The Bulletin of Atomic Scientists says the world is closer to Armageddon than it has ever been.

The science-based advocacy group is moving its famous Doomsday Clock to just 90 seconds before midnight.

The group Tuesday says the big reason is Russia’s invasion of Ukraine and Vladimir Putin’s veiled threats about nuclear weapon use.

The scientists say other existential threats include nuclear weapon increases in China, uranium enrichment in Iran, missile tests in North Korea, bio-threats such as a pandemic or lab accident and worsening climate change.

No doomsday has happened yet.