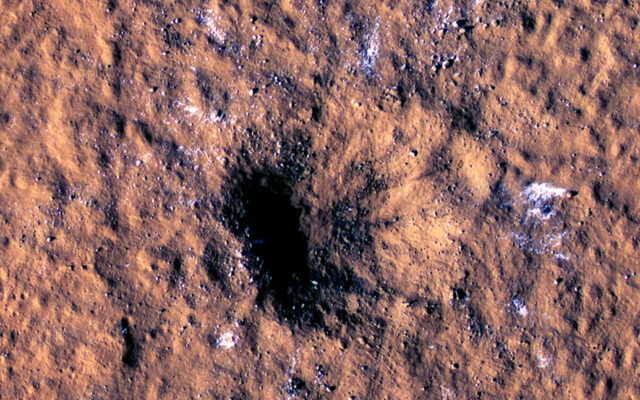 In this image made available by NASA on Thursday, Oct. 27, 2022, boulder-size blocks of water ice are seen around the rim of an impact crater on Mars, as viewed by the High-Resolution Imaging Science Experiment (HiRISE camera) aboard NASA's Mars Reconnaissance Orbiter. The crater was formed Dec. 24, 2021, by a meteoroid strike in the Amazonis Planitia region. (NASA/JPL-Caltech/University of Arizona via AP)

Scientists reported Thursday that last year’s barrages sent seismic surface waves rippling thousands of miles across Mars, the first ever detected near the surface of another planet.

The impacts carved out craters nearly 500 feet across.

The larger of the two churned out boulder-size slabs of ice.

The Insight lander measured the seismic shocks, while the Mars Reconnaissance Orbiter provided stunning pictures of the resulting craters.

The impact observations come as InSight nears the end of its mission because of dwindling power.