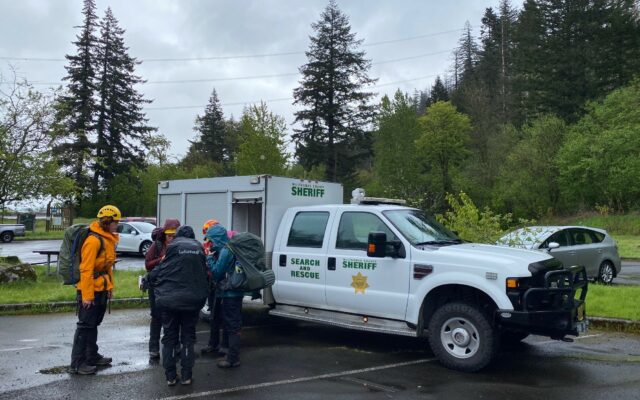 MULTNOMAH COUNTY, Ore. — It was a busy 24 hours for crews with Multnomah County Sheriff’s Office Search and Rescue in the Columbia River Gorge, rescuing two stranded hikers between Sunday and Monday afternoon.

A 51-year-old man wearing flip-flop sandals was found near Munra Point on Monday.  He was suffering the effects of mild hypothermia and was assisted down to I-84 where he was evaluated and said to be in good condition.

The trail is not official or maintained and it was reported to be dangerously steep and slippery and very difficult to follow.  The man said he left Sunday to go hiking and was not familiar with the trail.  He lost sight of the trail after a few hours and became disoriented.  His sandals fell off and his cell phone died.  The smoke from a fire he lit caught the attention of a worker at Bonneville Dam on Monday morning and the sheriff’s office was notified.

Search and rescue crews have reached the stranded hiker. The hiker is a 51-year-old man and is able to walk with SAR members. @MCSOSAR pic.twitter.com/KJuiZ1sUGY

On Sunday afternoon, a 25-year-old man who was not prepared for the deep snow at Larch Mountain used a personal locator beacon to notify first responders.  He was in good condition and assisted back down to safety.

Authorities remind folks that despite spring-like weather, many trails above 3,000 feet are still snow-covered and have not been cleared or maintained since last fall.