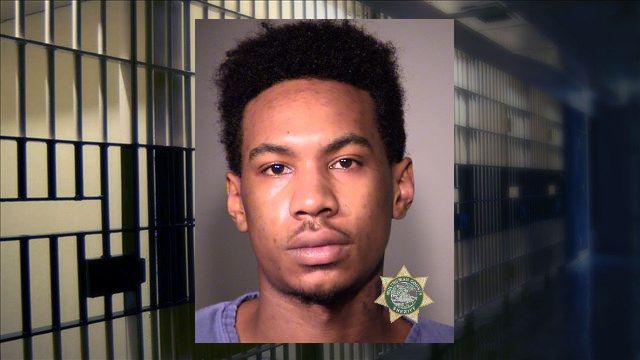 Portland, Ore. – Two men have been arrested for shooting and killing a man in Southeast Portland early Saturday morning. 19-year-old Christopher Watkins and 20-year-old Timothy Burks both face murder charges. The victim, 28-year-old De’Andre Rouse, was found shot to death at 151st and Stark. Detectives are still investigating and want to hear from any witnesses. Photo is of 19-year-old Christopher Watkins.

Watkins and Burks are both charged with one count of murder in the second degree.

According to court documents, this investigation started at approximately 5 a.m. on January 4, 2020 when two Portland Police officers were in the area of Southeast 148th Avenue and Southeast Stark Street on an unrelated call when they heard multiple shots being fired from close proximity.

One of the officers observed a vehicle traveling toward her with two people inside, according to court documents. The vehicle fled the area at a high rate of speed.

According to court documents, the officer observed a significant amount of blood in and around the driver’s seat. Furthermore, the officer saw a blood trail leading from the vehicle.

Other members of the Portland Police Bureau responded to the area of Northeast 124th Avenue and Northeast Halsey Street after receiving information from neighbors that two people were in the area and that they appeared to be hiding from police and that one of the individuals was bleeding heavily, according to court documents.

Officers responded and contacted Burks who was suffering from a gunshot wound to the arm, according to court documents. Burks was arrested and will be arraigned at a later date.

Police eventually located and arrested Watkins at approximately 6:15 a.m. on January 4, 2020 in the area of Northeast 102nd Avenue and Northeast Sacramento Street after they determined that his girlfriend had arranged transportation for him using a ridesharing application, according to court documents.

According to court documents, additional officers responded to the area of Southeast 151st Avenue and Southeast Stark Street and located Mr. Rouse dead beside a vehicle. Police located multiple .9 mm and .40 caliber shell casings in the street near the crime scene.

The Oregon State Medical Examiner’s Office determined Mr. Rouse died of homicidal violence as the result of a gunshot injury.

Like in all criminal and civil matters, electronic copies of court documents, which are not subject to a protective order, are available to the public through the Oregon eCourt Information (OECI) system.

No additional information can be released by the Multnomah County District Attorney’s Office at this time pursuant to the Oregon Rules of Professional Conduct.

A charging document is only an accusation of a crime. Watkins and Burks are innocent unless and until proven guilty.

The Multnomah County District Attorney’s Office works closely with the City of Portland’s Office of Youth Violence Prevention and attends the bi-weekly Community Peace Collaborative meeting, which is a coalition of law enforcement, service providers and community members who are focused on encouraging people to take a stand against gun violence.