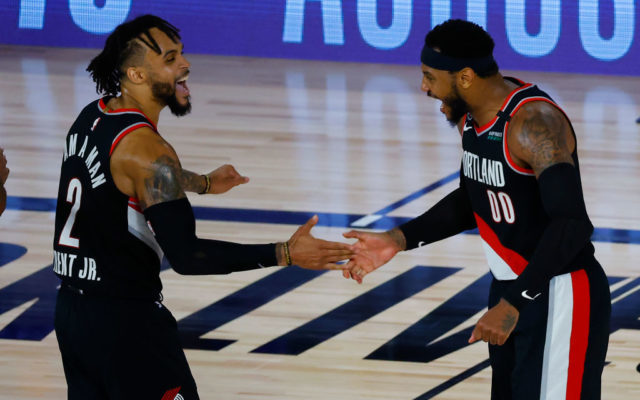 LAKE BUENA VISTA, FLORIDA - AUGUST 15: Carmelo Anthony #00 and Gary Trent Jr. #2 of the Portland Trail Blazers celebrate a three point basket against the Memphis Grizzlies during the fourth quarter in the Western Conference play-in game one at The Field House at ESPN Wide World Of Sports Complex on August 15, 2020 in Lake Buena Vista, Florida. (Photo by Kevin C. Cox/Getty Images)

Hours before tip-off, Jusuf Nurkic revealed his grandmother, Hana, died from COVID-19 on Saturday. The Blazers big man honored her in his performance against Memphis.

The Bosnian Beast had a double-double at halftime with 15 points and 17 boards. He finished with 22 and 21, respectively.

The Blazers struggled in the third quarter, as we’ve become accustomed to that, but this time they gave up 42 points.

Damian Lillard never fully took over, but he and Nurkic were the only reason the Blazers had leads in most of the first half. Lillard finished with 31 points and 10 assists.

Portland got major contributions from CJ McCollum and Carmelo Anthony in the fourth quarter.

McCollum scored 14 of his 29 points in the fourth, including eight points in less than two minutes near the end of the game.

As for Melo, his dagger three with 21 seconds left pretty much sealed the game. The future Hall of Famer poured in nine fourth quarter points, including five in the final 21 seconds. Anthony finished with 21 points.

Gary Trent Jr. didn’t light up the arc like he has most of the NBA restart, just 1-of-3, but he did have five steals. Three of his steals came in the final five minutes of the game.

Portland will face the Los Angeles Lakers on Tuesday night in the first round of the Western Conference.

Zach Collins only played seven minutes, and he didn’t return due to left ankle inflammation.

The Grizzlies put up a valiant effort against Portland. Ja Morant scored a career-high 35 points; Jonas Valanciunas had 22 points and 17 rebounds; while Brandon Clarke and former Duck Dillon Brooks scored 20 points each.