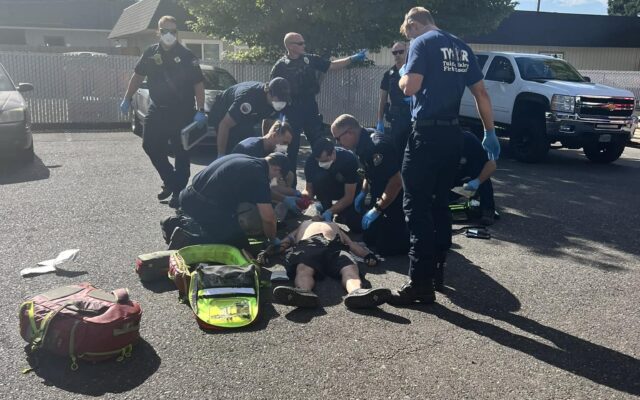 TIGARD, Ore. — Longtime Tigard businessman Mark Houston is likely alive today thanks to the quick reactions of his friends and emergency responders.  Mark co-founded M&W Automotive in Tigard and had just begun wrapping up a successful multi-decade run as a small business owner.

Earlier this month, Mark was visiting with his friend and business partner Brian Wiggs when all of a sudden, he passed out and hit the ground.  Mark was having a massive heart-attack.

Brian called over a man named Matt working nearby and the two men began administering CPR to Mark.  Brian took the lead with hands on his buddy’s chest.  “In and out, in and out.”  Brian tells KXL’s Brett Reckamp he was instantly relying on the training he had received in the U.S. Navy as a volunteer firefighter.  He remembered what to do and how to do it.

Matt called 911 and within approximately 8 minutes, Tigard Police arrived.  Lieutenant Brian Sigler took over the job of keeping Mark’s heart beating.  They all worked together until first responders from TVF&R arrived on the scene and began full-boat life saving measures.

Perhaps more than 17 minutes passed since Mark’s heart stopped and he had laid on the ground without a pulse.  Suddenly, he sprung awake and instantly cried:  “Where’s my bike!?”  Mark was standing on his bike at the moment he lost consciousness.

Since that day, Brian says his friend Mark has had some surgeries.  At last check, he was doing OK.  Brian says even Tigard Police Lt. Sigler and other first responders were amazed at how Mark was able to wake up – seemingly no worse for the wear.

Wiggs says this is a moment that reminds us how important it is to get at least some kind of training in life-saving CPR.  Classes are available now at Tualatin Valley Fire & Rescue and other units around the Portland area.

If you know a someone you think is an everyday hero, we would love to hear from you.  We highlight them every week as our “KXL Everyday Hero” – just send us an email:  [email protected]

Below is the shorter version of Brian’s story:

Below is the longer version of Brian’s talk with Brett: