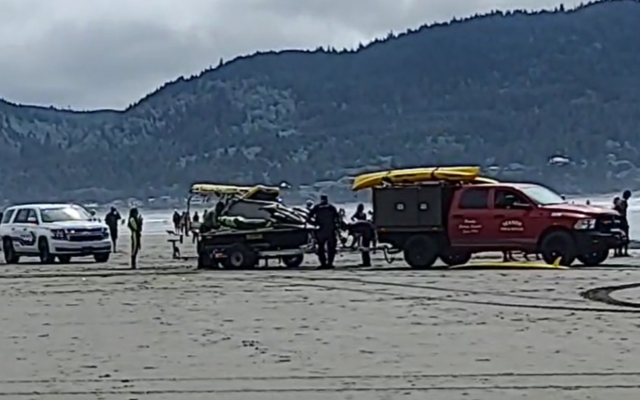 Seaside, Ore. —  Three lifeguards attempted to rescue two people who got caught in an active rip current off the beach in Seaside, Saturday afternoon. When Seaside Fire & Rescue crews arrived to help shortly after 2:30 pm, they found multiple bystanders also trying to assist the victims.

Crews used jet skis to quickly assist the lifeguards to bring the victims and bystanders back to the beach. Both victims were taken to Providence Seaside Hospital. One of the victims, a 50-year-old male was found unconscious in the water and later pronounced deceased, after unsuccessful attempts to revive him. A female victim in her teens did survive the incident.

A separate water rescue occurred about 45 minutes later in Cannon Beach. There two lifeguards brought two swimmers in distress ashore. One of the rescued swimmers, told first responders that they were waist deep in water one minute, and struggling in water over their heads the next.

Seaside officials want to remind beachgoers about the many dangers that the Pacific Ocean presents. You should always use extreme caution and always enter the water with others present. Learn more about how to recognize a rip current here.