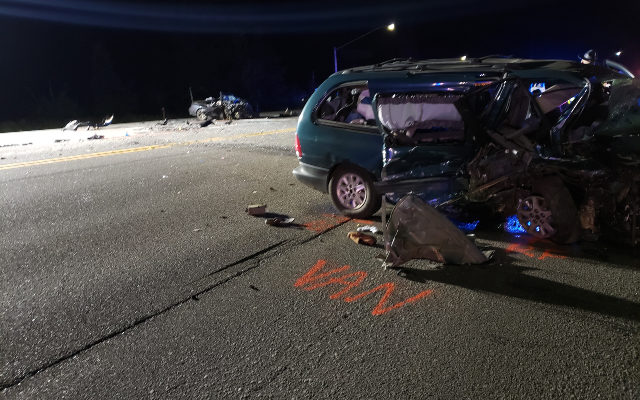 Crash on Highway 22 near Highway 51 in Polk County

PORTLAND, Ore. — From Southwest Washington to the Willamette Valley, there were three fatal crashes in just three hours overnight Wednesday.

A vehicle in Kelso crashed head-on into a utility pole on S Pacific Avenue at Yew Street around 10:30pm.  The passenger was killed.  Police believe the woman behind the wheel was intoxicated.

Just after midnight, a vehicle hit a tree at Northeast 24th and Prescott in Portland.  The driver was alive when paramedics arrived, but died at the hospital.  He’s identified as 49-year-old Bruce Morgan.

The third wreck happened around 1:30am in Polk County between Salem and Independence.  Two vehicles collided on Highway 22 westbound near Highway 51 when a vehicle crossed into oncoming traffic.  A passenger, 41-year-old Kimberly Johnson of McMinnville, died.  The two drivers were seriously injured.