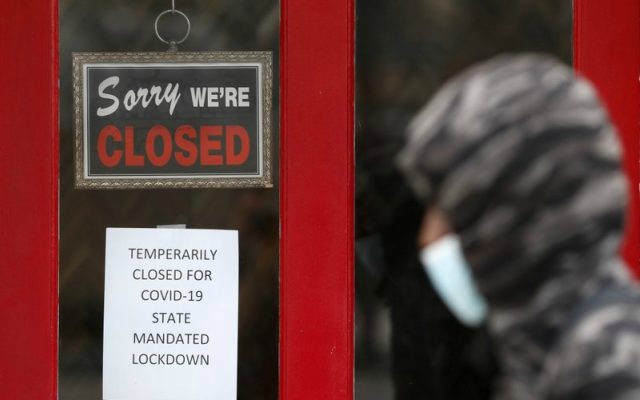 In this May 7, 2020 file photo, a pedestrian walks by The Framing Gallery, closed due to the COVID-19 pandemic, in Grosse Pointe, Mich. (AP Photo/Paul Sancya, File)

Portland, Ore. – Thousands of small businesses in Oregon may be suing Governor Kate Brown soon to get their money back they lost from being closed due to covid-19.
KXL’s Jacob Dean talked with the attorney involved.

Portland based lawyer John DiLorzeno filed the notice for a potential class action lawsuit on Friday to the Governor and DAS Director. He’s representing 3 local businesses, a bowling alley, a salon spa., and an arcade / family fun center, who have already signed onto the letter as representative plaintiffs.

DiLorzeno says they are not challenging the Governor on the Stay At Home order, they agree she had the right to enact the order. But in doing so, it triggers another law on the books that says people affected have to be compensated for it. DiLorenzo says when Governor Brown issued the stay at home order,  she protected some like teachers and state employees, but did not help small businesses. He hopes they can talk with the Governor and get lawmakers involved on a solution and resolve this through legislation – before it becomes a class action lawsuit and goes to the courts.

Here’s what DiLorzeno says about the letter he sent:

The claim for compensation is based on ORS 401.192(3) which states in part: “[w]hen real or personal property is taken under power granted by ORS 401.188, the owner of the property shall be entitled to reasonable compensation from the state.” Recently, the Oregon Supreme Court confirmed in the Elkhorn Baptist Church case that the Governor’s powers for issuing executive orders like this one are derived from ORS Ch. 401. In fact, the Governor’s Executive Order directly invokes ORS 401.188 as a source of her authority. As a result, her order has triggered the obligation for the state to provide compensation to these businesses.

The letter points out that ORS 401.192(3) dates back to the 1950’s and the Cold War.  At that time, legislators were concerned about reimbursing Oregonians if their property was taken by a governor’s emergency orders.  The circumstances warranting a governor’s exercise of  emergency powers were expanded in the 1980’s to emergencies other than war, like those we have recently faced with the Covid-19 pandemic.  However, the statute providing for compensation was not altered and remains in substantially same form as it was when it was adopted in the 1950’s.

The letter does not challenge the Governor’s authority to have issued the Executive Order, nor does it second guess whether doing so was an appropriate response to the crisis.  It does observe that the Governor provided some level of compensation for other impacted constituencies like state employees, school employees and, at least theoretically, those workers in affected businesses who lost their jobs.  However, the Governor left the owners of small businesses (the backbone of our state’s economy) to fend for themselves.

The letter concludes with an invitation to develop a compensation plan and to constructively collaborate if the Governor is of a mind to address this issue without resort to litigation.  A copy of the letter is attached.  A follow-up was sent to DAS Risk Management on Saturday.

Here a copy of the letter here: