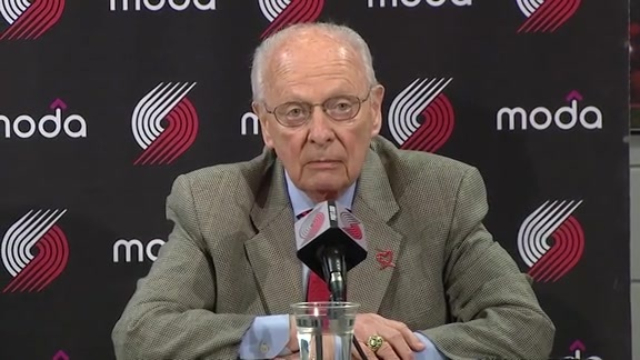 Born in Pennsylvania June 1st, 1929, “The Schonz” became the very first radio voice of the Portland Trail Blazers in 1970.

Before that, he was on the air in Baton Rouge, Louisiana and Seattle, including as the voice of Major League Baseball’s Seattle Pilots.

Back in 2019, he explained to John Canzano on 750 The Game that he joined the Blazers on a handshake deal “and I was the 6th guy hired by Harry Glickman…who said “now, I want you to put a radio network together.””

Throughout his career, Schonely was known for his famous calls, such as “Bingo! Bango! Bongo!”, “The coffin corner!”, “You’ve got to make your free throws.” and of course, “Rip City.”

Rip City became much more than just a saying.

It became the beloved nickname of the Blazers and the team’s fans.

Portland even wears uniforms complete with the famous phrase.

Schonely retired from the mic in 1998 after calling more than 2,500 Blazer games on radio and television.

In his later years, he worked with the team as an ambassador, doing special segments and attending charity and community events.

Also at the age of 80 in 2009, he was back on the radio to call part of the Blazers exhibition game in Veterans Memorial Coliseum.

During his career, he also called games for the Portland Beavers, using some of his famous catchphrases on the diamond.

He was inducted into the Oregon Sports Hall of Fame in 2002 and in 2012, he was awarded the Curt Gowdy Media Award from the Basketball Hall of Fame.

“The Schonz”, The Mayor of Rip City, the voice of the Portland Trail Blazers, dead at the age of 93.

He’s survived by his wife, Dottie, and four children.

Here’s more from the Trail Blazers:

“We are deeply saddened to hear of the passing of Trail Blazers legendary broadcaster Bill Schonely,” said Dewayne Hankins, President of Business Operations for the Trail Blazers. “Our hearts go out to his wife, Dottie, and the entire Schonely family during this difficult time. Bill was a warm, engaging and sharp person – always up for a joke, a keen observation or a kind remark. His mark on the organization, the state of Oregon and all of sports broadcasting will be felt for generations. No one loved Rip City more than Bill did and we are all forever grateful for his contributions to the community.”

In Schonely’s honor, there will be a private service and public celebration of life. Details will be made available at a later date. In lieu of flowers, donations are requested to be made to Providence Child Center and the American Heart Association in honor of Bill.

Reaction is pouring in:

I was the kid who used to sneak a radio under the covers to listen to the great Bill Schonely. He made me to want to be a broadcaster. Inspired and entertained us all. He said goodbye to #ripcity last night, at the age of 93. Thank you Schonz. pic.twitter.com/u0lT3AnX6U

My friend Bill Schonely provided the soundtrack for generations of @trailblazers fans and forever made our beloved Portland into #RipCity. I join all of #RipCity in extending condolences to Bill’s wife Dottie & his entire family. RIP to a true Oregon legend. pic.twitter.com/MkEebohTRB