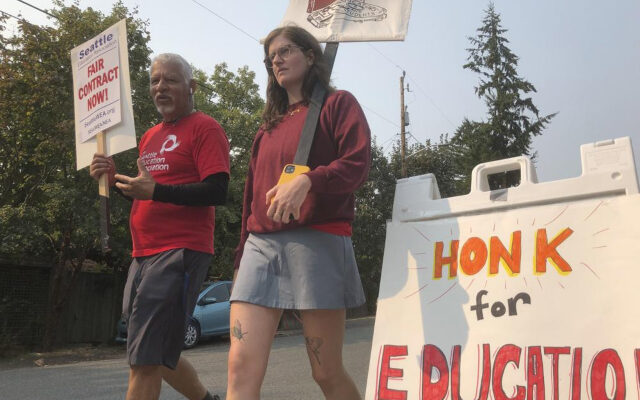 Guillermo Carvajal, a member of the support staff at Northgate Elementary School in Seattle, and Erin Carroll, an occupational therapist there, picket outside the building on the third day of a strike by the Seattle Education Association on Friday, Sept. 9, 2022. (AP Photo/Gene Johnson)

SEATTLE (AP) — Seattle Public Schools said late Monday it had reached a tentative agreement with the union for teachers who went on strike last week over issues like pay and classroom support.

Earlier Monday the district had cancelled classes Tuesday, the fifth school day that students have missed since the strike began began Sept. 7. That was supposed to be the first day for approximately 49,000 students in the district.

In a statement, the district said it would on Tuesday announce an update on when classes would begin.

“We look forward to welcoming students and staff for the 2022-23 school year,” the statement said.

Striking teachers said their main concern was educational and emotional help for students, especially those with special needs or learning difficulties.

In a statement the union, the Seattle Education Association, said: “We should all be proud of what we accomplished and what we stood up for: student supports and respect for educators.”

Meeka DiLorenzo has a son at a Seattle high school and supports teachers who walked out, but she worries about the toll on students whose first day has been delayed.

DiLorenzo’s 15-year-old son is a sophomore at Ingraham High School in Seattle. She was disappointed at the proposals put forward by district.

“Maybe it’s because of COVID — parents have a newfound appreciation for what teachers go through,” said DiLorenzo, who is a cellist in the Seattle Symphony.

Because her son is old enough to stay home alone, DiLorenzo hasn’t had to scramble for childcare like parents of younger kids. Both she and her son have at times joined teachers to walk the picket lines.

Problems the schools were dealing with before the COVID pandemic became exacerbated when students returned after pandemic-related closures last year, she said. Her son noticed the difference on the first day of school in the fall of 2021.

“It was a lot of instability and chaos,” she said.

This year, he’s not really looking forward to going back to school, but DiLorenzo is worried about the implications of delaying the opening of schools.

“For me, the mental health implications of keeping schools closed have a specific impact for teenagers,” she said.

In Seattle, the school district had offered pay raises of an additional 1% above the 5.5% cost-of-living increase set by state lawmakers — far less than the union says it wanted — plus one-time bonuses for certain teachers, including $2,000 for third-year Seattle teachers earning an English language or dual-language endorsement.

Teachers in the city have seen healthy raises since their last strike in 2015, with many making more than $100,000, thanks largely to a new state education funding model. The union has said it is primarily focused on winning raises for its lower-paid members, including instructional assistants and front office staff. Paraeducators in Seattle Public Schools start at $19 an hour — nowhere near enough to afford to live in the city, many say.

The union says it was opposing the district’s efforts to eliminate staffing ratios for special education students.

Districts around the country have faced labor challenges as the pandemic put extraordinary stress on teachers and students.

Teachers in Minneapolis, Chicago and Sacramento walked out earlier this year before securing new agreements.

Heather Larson lives in Snoqualmie, Washington, but her 16-year-old child attends Interagency High School in the Seattle district because it is the only one in the region for minors that are in recovery from addition.

“Getting them back to school is crucial,” Larson said about her child. “One of the harder things for kids with substance abuse disorders is the need to keep it consistent.”

She’s got a flexible job, where she can work from home some days, but on other days her child has had to go to work with her and sit in her office.

“I’m all for the teachers fighting for what they need,” Larson said.