Tacoma Mayor Calls For Officers To Be Fired Over Man’s Death, WA State To Review 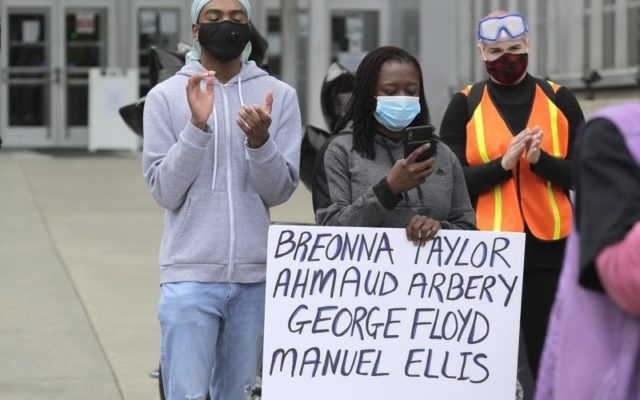 TACOMA, Wash. (AP) — The mayor of Tacoma, Washington, told the city manager Thursday to fire four police officers following the death of a man after police restrained him in March. Gov. Jay Inslee said on Friday the state will conduct an independent review of the investigation and any charging decisions related to Manuel Ellis’ death.

Mayor Victoria Woodards on Thursday night directed City Manager Elizabeth Pauli to fire the officers involved in the restraint of Ellis. Her order comes as the state and the nation have been roiled by the death of George Floyd in Minneapolis. Four Minneapolis officers have been arrested and criminally charged.

Woodards said the Tacoma officers should also be prosecuted in the death of Ellis, 33, who was black.

“The officers who committed this crime should be fired and prosecuted to the full extent of the law,” Woodards said in a statement aired live on Tacoma TV and Facebook. “I am demanding tonight that the Pierce County Sheriff review and confirm every action taken by each officer.”

The News Tribune reports the Pierce County medical examiner’s office ruled Ellis’ March 3 death a homicide caused by a lack of oxygen due to physical restraint. The newspaper reports methamphetamine intoxication and a heart disease were contributing factors.

Authorities have said Ellis appeared to be suffering from some sort of breakdown when they approached him. They said he attacked officers who were trying to calm him down.

The officers originally were placed on paid administrative leave and had since returned to duty. They were again put on leave Wednesday morning.

Tacoma police union representatives said they worried the decision regarding the officers’ fate was being made before the investigation is complete and said they’re confident evidence will show the four officers did no wrong.

”Without any facts, without an investigation, without due process, and with less than a minute of short, blurry, partial Twitter videos in hand, the mayor passed judgment on the actions of four Tacoma Police Officers,” the union wrote in a statement.

The Tacoma City Council unanimously voted to request an independent review of Ellis’s death — something Inlsee’s office had said he was considering, KNKX.org reported. Inslee on Friday afternoon said the state will conduct a review of the investigation and any charging decisions.

“My decision does not in any way pre-judge an outcome, but the family of Mr. Ellis, the City of Tacoma and every Washington resident deserves the confidence that an extra level of scrutiny will bring,” Inslee said in a statement.

Ellis was one of far too many black men who have died while in police custody in America, Inslee said.

“My staff and I have met in recent days with activists, protest leaders, families of victims of police killings, law enforcement officials and experts to begin the work of creating a permanent process to give independent review to these cases,” he said.

He said he wants to be able to present state lawmakers with a package of legislation by the end of the year that would also include requiring police to intervene and report if they witness unlawful use of force by another officer and examining use of force techniques used by police.

Hundreds joined Ellis’ family Wednesday night at a vigil and protest in Tacoma after learning of the autopsy results. Protesters marched in Tacoma against Ellis’ death on Friday.