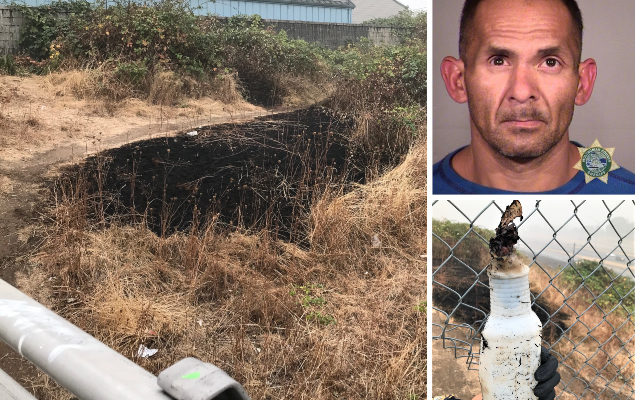 PORTLAND, Ore. — A man was arrested twice in less than 12 hours for setting at least seven fires in Southeast Portland.

A brush fire on East Burnside at Interstate 205 ignited around 4:30 on Sunday afternoon.  Firefighters put out the flames that burned grass along the freeway.  Officers were flagged down by a witness who identified the suspect and told them he was in a tent.

45-year-old Domingo Lopez Jr. admitted to setting the fire with a bottle bomb, known as a molotov cocktail, which was found at the scene,

Just after 3:30 on Monday morning, firefighters were again dispatched to the area where multiple fires were burning on the west side of I-205.  Drivers and firefighters put out the fires before they got out of control.  Lopez was found walking along the shoulder with a lighter.

Nobody was injured and no structures were burnt by the fires.

Lopez is charged with seven counts of Reckless Burning and Disorderly Conduct.  He could also face charges of arson.  He is undergoing a mental health evaluation.