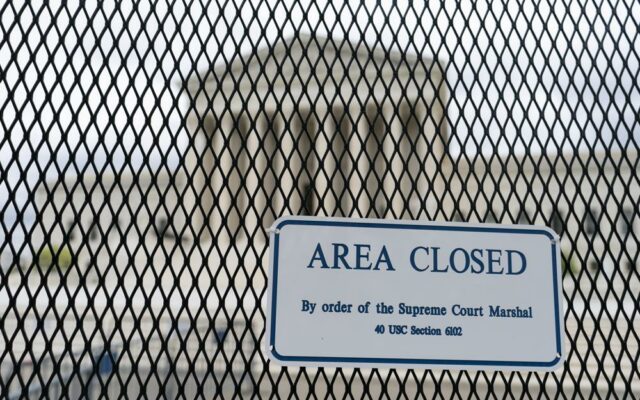 An anti-scaling fence has been placed around the U.S. Supreme Court Thursday, May 5, 2022 in Washington. A draft opinion suggests the U.S. Supreme Court could be poised to overturn the landmark 1973 Roe v. Wade case that legalized abortion nationwide, according to a Politico report released Monday. Whatever the outcome, the Politico report represents an extremely rare breach of the court's secretive deliberation process, and on a case of surpassing importance. (AP Photo/Alex Brandon)

WASHINGTON (AP) — Is there a new American motto: In nothing we trust?

By lots of measures, most in the U.S. lack much confidence in large institutions and have for years. Congress? Two big thumbs down. The presidency? Ehh. Americans are also distrustful of big business, unions, public schools and organized religion. Indeed, they hold abysmal views of the functioning of democracy itself.

The Supreme Court has been something of an exception. The one branch of government not dependent on public opinion has traditionally enjoyed higher public esteem than the branches elected by the people. Its above-the-fray reputation, cultivated with exquisite care, once served it well.

Now the justices face a reckoning over the audacious leak of an early draft opinion that strikes down the constitutional right to abortion, an episode that has deepened suspicions that the high court, for all its decorum, is populated by politicians in robes.

Republican members of Congress are suggesting a sinister left-wing plot to derail the outcome of the final decision. Liberals are alleging machinations from the right to lock the justices into their preliminary vote. For all that speculation, neither side knows who leaked the draft to Politico and why.

What’s clear is that the affair has popped a deferential bubble around the court.

“My confidence in the court has been rocked,” Sen. Lisa Murkowski of Alaska, one of the few Republican senators in favor of abortion rights, said with alarm. Vice President Kamala Harris accused the justices of mounting a “direct assault on freedom” if they vote as they signaled. Senate Majority Leader Chuck Schumer, D-N.Y., accused Trump-nominated justices of lying to Congress about their abortion views in their hearings.

Elected officials do not normally talk this way about the justices. But now, it seems, the jurists are fair game, just another contingent of power players in the Washington viper pit.

In contrast, after mounting a fierce legal fight to settle the implausibly close 2000 election, Democrat Al Gore held back his grievances about political taint on the court when it crushed his hopes in a decision that made Republican George W. Bush the president.

Gore didn’t hesitate to “accept the finality of this outcome,” as much as he said he disagreed with it. The deferential bubble was evident. But that decision became seen as the modern starting point in the erosion of trust in the court.

In the years since, Democrats gutted the filibuster on one front to help them populate the lower federal courts with as many judges as possible, knowing they were setting a precedent that could bite them in the future.

Then Republicans did the same for Supreme Court nominees in the judicial equivalent of nuclear escalation.

And there was Donald Trump. During his presidency, Trump specialized in what’s known by the political class as saying the quiet part out loud. This included his sizing up the judiciary as a political beast, made up of Democratic judges or Republican ones.

For the justices, who have long cloaked themselves in the notion that the politics ends once they ascend to the bench, it was a step too far when Trump accused “Obama judges” of standing in his way and otherwise disparaged judges he didn’t like.

“We do not have Obama judges or Trump judges, Bush judges or Clinton judges,” Chief Justice John Roberts said in an unusual statement rebuking Trump’s comments. “What we have is an extraordinary group of dedicated judges doing their level best to do equal right to those appearing before them.”

Yet people in the United States, in recent times, have grown suspicious about judicial independence, with a strong majority believing justices should keep their political views out of their decisions but not even 1 in 5 polled believing they do an excellent or good job of that.

In 2020, Trump nominee Amy Coney Barrett became the first justice in modern times to win confirmation without a single vote from the minority party. She’s aware of how that looks.

“My goal today is to convince you that this court is not comprised of a bunch of partisan hacks,” she told an audience in Louisville, Kentucky, in September at a center named for Senate Republican leader Mitch McConnell, who had engineered her fast confirmation. Barrett was one of five justices signaling a vote against Roe v. Wade in the leaked draft, Politico said.

As controversial as the Roe v. Wade decision affirming abortion rights was in 1973 and in the years since, it was not a ruling driven by partisanship. The vote was 7-2, with five of the justices in the majority nominated by Republican presidents.

Now, Justice Sonia Sotomayor, a liberal on the conservative-majority court, warns that a reversal in 50 years of abortion rights would shatter the idea that American justice is blind to partisanship or party.

“Will this institution survive the stench that this creates in the public perception that the Constitution and its reading are just political acts?” she asked in a Mississippi abortion case in December. She said she thought it wouldn’t survive that.

Except when a monumental decision like this abortion one comes out, or when Congress is screening court nominees in its performative hearings, the Supreme Court works largely out of sight and out of mind. But in New York City, the leak got Sequoia Snyder thinking about the court. Is it just one more institution not to be trusted?

“When you think about it, the power is not in the hands of the people,” said Snyder, 22. “We don’t vote on that. The Electoral College … the popular vote is ignored. The police are not very regulated, kind of can do what they want with impunity.

“Like every every facet of our society you go to, we don’t really have the power or a voice. So I just think it’s crazy that nine people have the final say on like everything in the country and they can never lose their job. It just seems weird.”

In Charleston, outside West Virginia’s only abortion clinic, Dennis Westover, a 72-year-old retired electrical engineer, sat in a lawn chair with an anti-abortion sign. He, too, sees weird doings from the court.

“One side or the other did it for a political motive to stir up some kind of stink,” he said of the leak. “We human beings do what we do for whatever we think is a good reason. … What was the reason? It couldn’t be a good one because you leaked Supreme Court privileged information.”

In an Associated Press-NORC Center for Public Affairs Research poll last month, only 18% of U.S. adults said they have a “great deal” of confidence in the Supreme Court. About 27% have hardly any confidence in it.

Still, the court’s standing has been deteriorating in recent years. The 2021 General Social Survey suggested confidence in the high court was among its lowest points in the last half century.

In September, a Gallup poll found 54% said those surveyed had at least a “fair amount” of confidence in the court, down from 67% in 2020. Only one other time in five decades has that confidence fallen below 60%.

The poor ratings of government couple with grim views of U.S. democracy and a disenchantment with the pillars of society almost everywhere you look.

Gallup has tracked public opinion of 14 core institutions across the spectrum — organized labor, the church, the media, the medical community among them — and found confidence in them sagging, with the share expressing high confidence never rising above 36% on average over 15 years. Only the military and small businesses get a resounding vote of confidence.

Overlaying everything is a sense that the very foundation of the republic is in trouble. In January, 53% said in an AP-NORC poll that democracy in the U.S. is not working well; only 8% thought it was working very or extremely well.

That state of affairs emanated from a 2020 election that saw Trump fight fiercely and futilely to reverse Democrat Joe Biden’s clear White House victory. Trump’s false allegations of a rigged election have resounded across the country as the two parties square off over state election laws in response.

In his effort to cling to power, though, Trump also confronted the limits of political influence in the judiciary as he and his campaign brought a battery of far-fetched legal challenges to courtrooms only to have them systematically fail.

“Trump judges” didn’t save him.