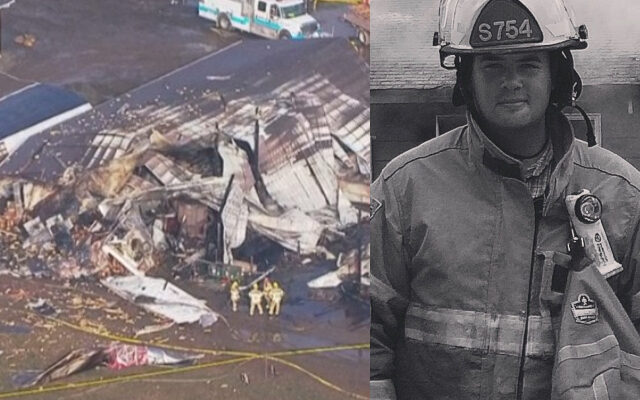 Austin Smith, 30, died after an explosion occurred while he was battling a large barn fire.

Hundreds of emergency vehicles — fire, EMS and law enforcement from Oregon, Washington and neighboring states — participated in a procession from Woodburn to the St. Paul Rodeo grounds before the afternoon memorial service.

The blast happened on Feb. 3 soon after firefighters arrived at Champoeg Farm, critically injuring Smith, a volunteer firefighter. Paramedics provided first aid and Smith was flown by a medical evacuation helicopter to Oregon Health & Science University Hospital in Portland, but he died of his injuries.

Smith had been with the St. Paul Fire District since 2015.

“He was every bit of what St. Paul’s about,” St. Paul Mayor Marty Waldo said. “He gave of himself. People, young people like him, they’re the future of St. Paul. It’s a pretty big blow for the community.”

Smith is survived by wife Ashley and many relatives.

St. Paul is located about 30 miles (48 kilometers) southwest of Portland and has just over 400 residents.