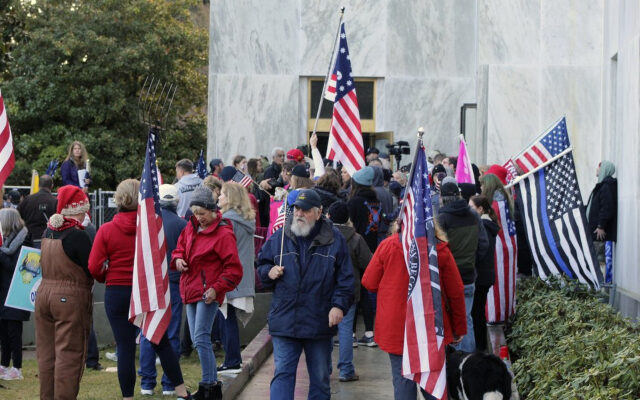 Pro-Trump and anti-mask demonstrators hold a rally outside the Oregon State Capitol on Monday, Dec. 21, 2020, as legislators meet for an emergency session. (AP Photo/Andrew Selsky)

Lawmakers are at the Capitol to consider measures that would provide $800 million in relief to people struggling from the COVID-19 pandemic and this summer’s massive wildfires.

Police said, while entering the building, protestors used chemical agents and bear spray against officers. At least two people were arrested after a smaller group of protestors were successful in entering a portion of the Capitol building. Outside protesters banged their fists against the doors chanting, “Let us in.”

Police blocked off streets surrounding the Capitol building, but as of noon people remained, shouting “Arrest Kate Brown.” One person climbed on top of a 20-foot tall relief sculpture, next to the front steps of the building, and waved an American flag as people cheered.

Other protestors walked around with rifles slung across their body as state police, within armored vehicles, repeatedly announced that people must leave the area.

“The Oregon State Police encourage people to exercise their first amendment rights, but it must be lawfully,” state police said in a statement Monday. “If you commit a crime you will be subject to arrest.”

The Capitol is closed to the public during the special session as part of a COVID-19 safety measure. However virtual testimony about the proposed bills that are expected to be discussed by lawmakers Monday was allowed during Thursday and Saturday hearings,.

There were tense moments inside and outside the Capitol.

On the Senate floor Monday morning, Republican Sen. Dallas Heard stood before his colleagues accusing Democrats and Senate President Peter Courtney of joining Gov. Kate Brown’s “campaign against the people and the children of God.”

The senator from Roseburg called the special session “illegitimate” as the public is not allowed inside and described it as an “unchecked assault” against people and their freedom.

In addition he decried the mask mandate.

“If you had not done such great evil to my people and had simply asked me to wear my mask, I would have,” Heard said. “But you commanded it and therefore I declare my right to protest against your false authority and remove my mask.”

During the special session lawmakers are asked to follow regulations including wearing a face covering, limiting the number of people in elevators, following one-way hallways and physical distancing while on the legislature floor.

Heard ended his brief statement by saying he would stand at he microphone without a mask for 30 seconds as he ripped off his surgical-style mask.

“Your time is up,” Courtney said seconds later as he banged the gavel.

“No it is not Mr. President,” Heard said raising his voice. A quick back and forth ensued before Heard’s microphone was shut off and he stormed out of the chamber.

The four bills expected to be taken up Monday during the one-day special legislative session include a proposed eviction moratorium that includes $200 million in relief for landlords and tenants, a restaurant relief package that includes a provision legalizing cocktails to-go, a bill that would protect schools from some coronavirus-related lawsuits and a measure that would transfer $600 million in to the state’s emergency fund for COVID-19 and wildfire-response and recovery.

A fifth bill, that would extend liability protections from coronavirus-related lawsuits to hospitals and health care providers, did not make it past the Joint Committee meeting.

The bill that has dominated discussions among lawmakers for weeks and drove the immediate need for a special session is House Bill 4401, which focuses on evictions.

With the federal and state eviction moratorium set to expire at the end of the year, the issue has been pushed to the forefront.

For weeks, housing advocates have implored lawmakers to extend the moratorium, estimating that between 20,000 and 40,000 Oregon households could be at risk for eviction.

The proposal extends the moratorium on residential evictions through June 2021. The bill would also require tenants to submit a sworn statement that they’ve experienced financial hardship in order to be protected from eviction.

The main sticking point however is in the second part of the proposal — a $200 million package in which $50 million will be allocated for rental assistance to tenants for the months ahead and $150 million to small landlords for previously unpaid rent. In order for landlords to receive funds they must forgo 20% of past-due payments, which Drazan described as “dramatically unfair.”