Portland, OR.—Officers say a woman and her six-year-old daughter activated the lights at a marked crosswalk at 107th and Division just after 6 p.m. Monday night. As they started crossing, the suspect vehicle passed the stopped cars on the right side in the bike lane, then struck the child. The mother was not hit. The girl was taken to the hospital and treated for non-life threatening injuries. Police say the suspect vehicle is a white sedan that was last seen heading eastbound on Division, then possibly westbound from Southeast 111th Avenue from Powell Boulevard. Anyone with information about this hit and run crash should call non-emergency police dispatch at (503) 823-3333.

Working closely with the community, the City of Portland is making outer SE Division Street (82nd to the city limit) safer for everyone who uses the street. This project is part of Portland’s Vision Zero strategy to eliminate all traffic deaths and serious injuries by 2025.

Since 2009, the City of Portland has been working with the community on outer Division Street to develop projects that improve safety, including sidewalks, safer crossings and bike lanes. Safety for people walking is a special focus because outer Division is one of Portland’s most deadly streets for walking.

How can we make Division safer?

The City of Portland has a responsibility to design streets that help keep people safe, even when people make poor decisions or mistakes.

This plan uses tools proven to prevent crashes and save lives: 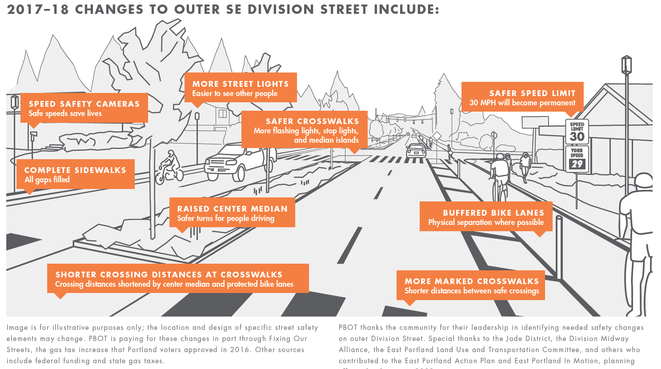 Image is for illustrative purposes only; the location and design of specific street safety elements may change. PBOT is paying for these changes in part through Fixing Our Streets, the gas tax increase that Portland voters approved in 2016. Other sources include federal funding and state gas taxes.

PBOT thanks the community for their leadership in identifying needed safety changes on outer Division Street. Special thanks to the Jade District, the Division Midway Alliance, the East Portland Land Use and Transportation Committee, and others who contributed to the East Portland Action Plan and East Portland In Motion, planning efforts that began in 2009.

PBOT will work through these tradeoffs with the community through 2018.

When will the work happen?

The Outer Division Safety Action Plan includes all PBOT safety enhancements, most of which will be completed in 2018 and 2019.

In addition, a separate but complimentary project managed by TriMet will construct street safety improvements in late 2019-21 to support a new rapid bus line. View more information about the Division Transit Project at trimet.org/division.