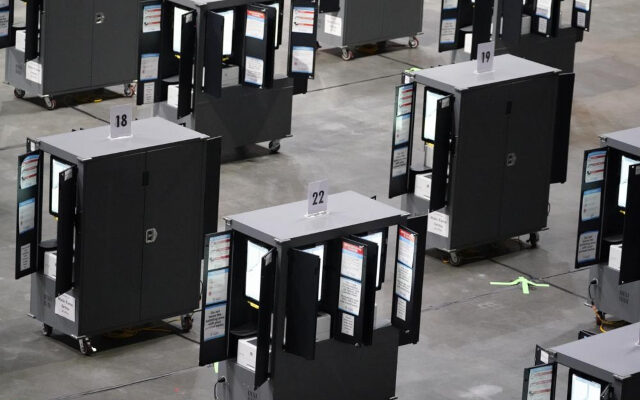 Multnomah County, Ore. – As a part of a series of proposals brought forth by the Multnomah County Charter Review Committee, voters during the midterm election will be asked to extend the right to vote to non-citizens. If it passes, Ballot Measure 26-231 wouldn’t immediately give non-citizens the right to vote, but rather allow county leaders to explore the legal options of extending them the right.

“It’s about making sure that people who live here are able to be represented. A lot of times people who are immigrants, even if they aren’t here legally are often times paying taxes,” That’s Annie Kallen with the Charter Review Committee sharing why the group brought this proposal forward. “People should be able to have a say in how the government is run. Especially if they have kids in school. But I do respect that it’s a complex subject and understand why there would be opposition.”

Supporters of the measure say citizen or not, these are members of the community that are impacted by the decisions of public officials.

“It’s taxation without representation,” said Cayle Tern, Immigrant Program Manager for the Asian Pacific Network of Oregon. “One of the biggest things for me is, according to the Oregon Center for Public Policy, is that non-citizens pay about $81 million in Oregon taxes according to 2017 data. Non-citizens play a major role in where we spend our tax dollars and there should be some sort of representation for the things that go on here.”

Since it would only impact county elections, having a say in their child’s education is another key factor for supporters.

“Having local voting options seems like it could be a potentially good thing because parents would have an opportunity to vote in those local elections as it relates to schools, which are pretty important for people who live and work in Multnomah County,” said Marc Rodriguez, Chicanx/Latinx history expert at Portland State University.

Opponents disagree that paying taxes means you should get the right to vote.

“I mean there was a time when we required people to own property in order to vote. We have separated the right to vote with taxes. Citizens get the right to vote whether or not they pay taxes, whether or not they own property,” said Kevin Mannix a Salem-based attorney and Republican running for the State House of Representatives. “If people want to be here and make a living than they should be paying taxes. You pay taxes because you’re here taking advantage of our society and you’re earning a living or you’re running a business. If you make money, you pay taxes on it. So paying taxes to me is a completely separate notion.”

It’s not exactly a red and blue issue. Some opposition has also come from the left, with Gubernatorial Candidate Tina Kotek expressing worries over the ballot measure. She has gone on the record saying it could be hard to implement, costly and complicated because you would have to create a new voter registration system. Mannix agrees with those issues over logistics.

“First, we are creating complications in the voter registration system where we’re going to have to make a distinction between those who are citizens and those who are not.”

Another argument from the left, is that there is a fear that if there is public record of non-citizens, it could put them at risk with immigration services.

“These discussions are very real, and I think it’s important for us to listen and hear the different perspectives,” said Tern, who reminds voters this doesn’t immediately create a new law. And if it does pass, these are discussions that will be had if county leaders choose to move forward with it. “It’s important as we create the law, we are mindful of the unintentional effects of how this could do harm to people.”

Rodriguez sees where those on the left are coming from, but doesn’t believe there’s a ton of merit to the argument.

“I don’t know if we have enough real impact information to back that up.”

The other biggest point of debate is the legality of it. Which the Charter Review Committee was aware of when it brought this forth.

“We had a lot of conversations with the county attorney over this,” Kallen said. “And that’s why it got worded the way it did (which is “[E]xtending the right to vote to noncitizens, in elections for county officers and on county measures, to the fullest extent allowed by law”). So we’d be prepared for any legal repercussions that might come out of it, and not put the county in a bind. Where they’re having to do something that they can’t do. So that’s why it’s vaguely worded, to try to prepare for anything that might be coming.”

Mannix says this contrary to state law and will tie the county up in a costly legal battle.

“The old provision doesn’t directly say non-citizens cannot vote, it says citizens can vote. Now practically speaking, when lawmakers have passed a provision in the Oregon constitution or law saying citizens can vote, that tells us who gets to vote,” Mannix said. “The context of that having passed goes back historically to a time when women were not allowed to vote, and a way to take down that barrier was to change our constitution to say citizens can vote. So that eliminated the prohibition that provided that only men could vote.”

Tern interprets the law differently saying states have the choice to decide who votes and who doesn’t. Rodriguez says the county can always be sued, and says it’s a red herring to not pass this because of the possibility of legal action.

“I don’t see the challenge in the courts being particularly important. If we decided to lower or increase our speed limit somebody might challenge that, but that wouldn’t be a reason not to do the thing,” Rodriguez said.

Plus, historically, non-citizens have had the right to vote in Oregon. When it first became a state, non-citizens were allowed to vote.

“Oregon allowed non-citizen voting up until 1914, when it was repealed at the ballot. So Multnomah county has a chance to allow it again,” Tern said.

Supporters also say there’s the issue that the naturalization process takes many years, and all the while they wait, they are being impacted by the decisions of leaders in the community where they are working, living and playing.

“At the national level, we know there’s a huge effort in reducing the backlog of folks who are applying for citizenship,” Tern said. “According to the Department of Homeland Security, there’s roughly 9.2 million that are eligible for naturalization, but we are unable to process them. There are thousands of unused green cards.” Plus it’s an expensive process, and it’s becoming more unaffordable for many to pay the fees required during the naturalization process.

“There are so many barriers attached to becoming a citizen, that it makes it harder and harder for people.”

He adds that 13% of Multnomah County’s population is foreign born. This includes those who are now U.S. citizens and those that are eligible to become one.

Mannix does not see it this way.

Both Tern and Rodriguez question whose to say who is invested in their community and who isn’t.

“I don’t understand where that criticism is coming from. How committed is the average resident in Multnomah County,” said Rodriguez, who also pointed out that isn’t it more democratic to have everyone living in your community be equally represented? “The immigrants that take the naturalization exam sometimes know more about the American Constitution and our political history than your average American on the street.”

As a Political Historian, Rodriguez will be watching this measure closely as it will serve as a barometer for both Oregonians and Americans feelings towards the Latinx community.

“If this gets voted down in Multnomah County, one of the bluest counties in all of the U.S. than that says something about the commitment of progressives and liberals to the very commitment to progressivism that they see as the weird place they live in,” making a joke off keeping Portland weird. “Because on several occasions, Oregon has voted down things that would have been responsive to the needs or interest of the Latino community, which is the largest minority community in the state of Oregon.”

If this passes the county would join a very small club of local governments that have allowed a sweeping expansion of voting rights. Others include Montpelier in Vermont, nearly a dozen cities in Maryland, and New York City.