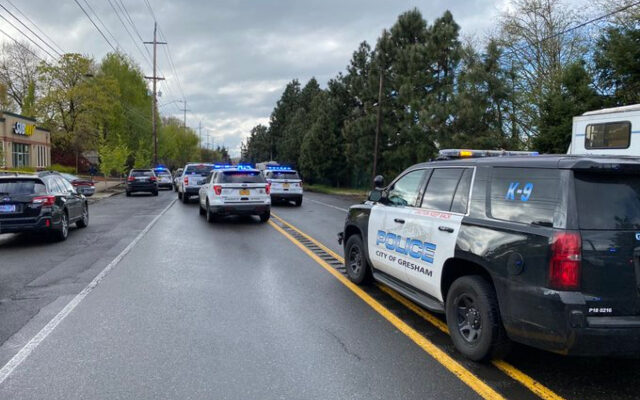 TROUTDALE, Ore. — Two people were arrested after leaving the scene of a robbery, firing gunshots at Multnomah County Sheriff’s Deputies and crashing on Tuesday afternoon.  A third person remains wanted.

Investigators say the suspects robbed a retail store at the Columbia Gorge Outlets armed with a gun around 4:00pm and pointed the gun at a security guard.

The suspects got onto I-84 westbound where a sheriff’s deputy deflated at least one tire with spike strips.  They exited the freeway and turned north onto NE 238th Drive.  While traveling west on NE Sandy Blvd., gunshots were fired towards deputies and bullets struck at least one patrol vehicle.

After crashing into a car near Northeast 162nd and Sandy sending the driver to the hospital, two people were arrested at the scene.  One of them was taken to the hospital for a medical evaluation.  Deputies recovered a gun near the suspects’ vehicle.

A third person ran away sparking an hours-long search that was called off Tuesday night.  A woman is still wanted.  She’s white and was last seen wearing a black hooded sweatshirt and grey pants.