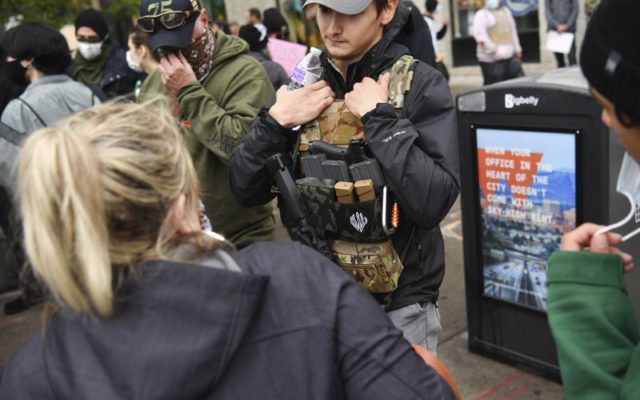 The politicians characterized the armed people who gathered in groups of four or five as “vigilantes,″ according to The Spokesman-Review.

Owners of several downtown businesses have also complained about the presence of the armed people at their storefronts and in their parking lots during the Sunday protests in response to the police killing of George Floyd in Minneapolis.

“Their presence did not contribute positively in any way to the protest,” the statement from the politicians said. “In fact, their presence made the situation more tense and our city more dangerous for all involved.”

John Waite, the owner of Auntie’s Bookstore, posted a letter to city officials on Facebook Tuesday that argued the presence of militia members downtown is not conducive to operating a business.

The Globe, a restaurant and bar, posted a statement on its Facebook page that it stands with the Black Lives Matter movement and did not ask for the presence of armed people near its entrance.

Woodward and Spokane Police Chief Craig Meidl have said there is little the city can do to remove armed people from the street because Washington state permits the open carrying of firearms.