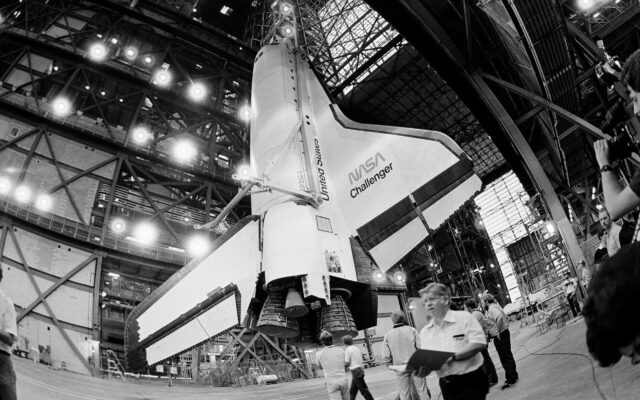 FILE - The space shuttle Challenger hangs suspended inside the Vehicle Assembly Building, April 10, 1985, as preparations are made to mate it with the booster rockets and external tank. On Thursday, Nov. 10, 2022, NASA announced that a large section of the destroyed spacecraft has been found buried in sand at the bottom of the Atlantic, more than three decades after the tragedy that killed a schoolteacher and six others. (AP Photo/Phil Sandlin, File)

CAPE CANAVERAL, Fla. (AP) – A large section of the destroyed space shuttle Challenger has been found buried in sand at the bottom of the Atlantic.

Divers for a TV documentary crew spotted the piece in March, and NASA recently verified that it was part of the shuttle that broke apart during liftoff in 1986.

All seven on board were killed, including the first schoolteacher bound for space, Christa McAuliffe.

The remnant is more than 15 feet by 15 feet and remains on the ocean floor just off the Florida coast near Cape Canaveral.

The piece is believed to be from the shuttle’s belly.