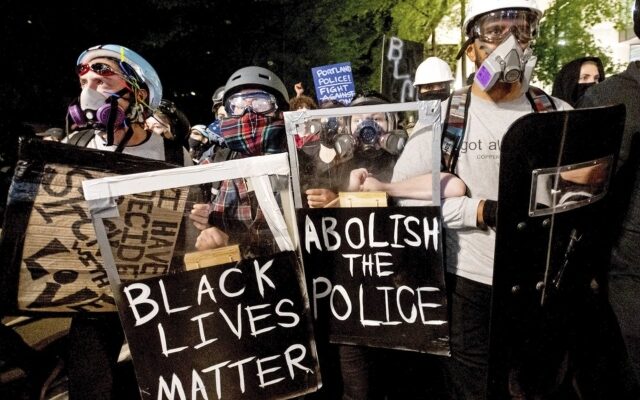 “The Trump administration’s political threats against Seattle and other Democratic cities are unlawful and an abuse of federal power,” Seattle Mayor Jenny Durkan said in a news release announcing the federal lawsuit. “It’s immoral, unconstitutional, and shameful that we are forced to expend any resources on this political theater.”

The lawsuit ridiculed the designation, calling the president’s action “offensive to both the Constitution and common sense” and describing the notion of anarchist jurisdictions “an oxymoronic designation without precedent in American jurisprudence.” But it also noted that the consequences of withholding federal money during a pandemic are “deadly serious.”

“I said weeks ago if the Trump administration persisted in trying to illegally take away funding from New York City we would take them to court, and we will beat them in court,” New York City Mayor Bill de Blasio said Thursday.

The lawsuit, filed in U.S. District Court in Seattle, argues that unless Congress says otherwise, the president can’t add conditions to money Congress has appropriated. The cities say the designation was arbitrary and capricious, and based on vague and subjective factors. The lawsuit also alleges that the administration violated due process rights and the 10th Amendment to the Constitution, which specifies that powers not given to the federal government — such as local policing authority — are reserved for the states.

“It is the Defendants, not the Cities, who are engaging in lawless behavior and threatening the democratic order established by the Framers,” the lawsuit said.

The Justice Department did not immediately respond to an email seeking comment.

New York City Corporation Counsel Jim Johnson, who joined de Blasio at the mayor’s daily briefing, said the cities are suing now because the federal government has begun taking concrete steps to withhold funds. “They’ve actually taken this anarchist designation and started to include it in applications for federal grants,” Johnson said.

As much as $12 billion in federal money affecting health, transportation and law enforcement programs could be at stake, Johnson said.

In one example cited in the lawsuit, the Federal Transit Administration announced this month that it will consider applications for a current COVID-19 public transportation research grant “in accordance” with the anarchist memo.

The Justice Department said the three cities were designated as “anarchist” jurisdictions because they met criteria including “whether a jurisdiction forbids the police force from intervening to restore order amid widespread or sustained violence or destruction” and whether the city “disempowers or defunds police departments.”

For New York, Attorney General William Barr cited “increased unrest, gun violence, and property damage” as the City Council cut $1 billion from the police department’s budget for next year. For Portland, he cited the continuous protests and vandalism, and he accused Seattle of permitting anarchy in the “Capitol Hill Occupied Protest,” a protest zone of a few city blocks that officials cleared out months ago.