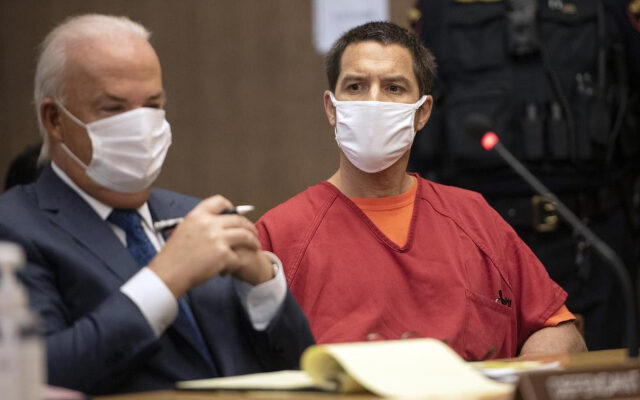 SACRAMENTO, Calif. (AP) — Nearly 17 years after being sentenced to die, Scott Peterson was resentenced to life without parole Wednesday during an emotional hearing in which family members of his slain pregnant wife, Laci, called him out for the Christmas Eve killing in 2002 and his apparent lack of remorse.

“Scott, 19 years ago today, you were in the midst of planning Laci’s murder,” said her mother, Sharon Rocha, addressing Peterson directly as he sat expressionless, handcuffed in a red and orange jail uniform.

“I still feel the grief every day, after 19 years,” she said. “Your evil, self-centered, unforgiveable selfish act ended two beautiful souls. And for what reason? There was no reason other than that you just didn’t want them anymore. You didn’t want a baby nor the responsibility of being a father. You’re a coward.”

“I have dreams about her,” she added about her daughter, who was 27 and eight months pregnant when she was killed carrying the boy the couple planned to name Connor. “And sometimes when I wake up, I cry because they’re so realistic and I know I’ll never see her again.”

She also envisions what Connor would be like now, at age 18, had he lived.

The California Supreme Court ruled a year ago that Peterson’s jury was improperly screened for bias against the death penalty. Stanislaus County District Attorney Birgit Fladager, who came to fame as one of three prosecutors in Peterson’s trial, opted this time to settle for life without parole.

Peterson’s attorney, Pat Harris, said his client has shown no remorse because he’s not guilty. He said, as he has in the past, that the defense can now prove that burglars were nearby on the day Laci disappeared — though investigators say they were ruled out as suspects.

Peterson was uniformly described as a loving husband and expectant father, Harris said, until it became public that he was having an affair at the time of his wife’s disappearance.

Then “he quickly became the most hated man in America,” Harris said, with a billboard outside the courthouse during his trial asking if he was a “man or monster.”

Peterson was prepared to speak, something he didn’t do during his initial trial and sentencing, Harris said, but Superior Court Judge Anne-Christine Massullo didn’t allow it.

But Harris and Stanislaus County Assistant District Attorney Dave Harris sparred over Peterson’s pre-sentencing probation report. It was not made public, but the prosecutor said that in it Peterson “is claiming he’s wrongfully convicted, that he’s innocent, and that he has sorrow for the loss of his family.”

His defense attorney accused prosecutors of “insinuation” and taking incidents out of context. Where Peterson did lie, he said, it was to hide his extramarital affair because he knew it would derail any further investigation.

Laci Peterson’s brother and sister, Brent Rocha and Amy Rocha, added their own emotional comments during the hearing.

“Because of you. our holidays have never been the same. Every Christmas Eve I relived the nightmare that we still live in now,” said Amy Rocha, sometimes in tears. ”Even though the death penalty has been lifted, you will still be punished in this life and after.”

Massullo resentenced Peterson without adding her own significant comment. She is separately considering if Peterson was prejudiced by juror misconduct.

He had been in San Quentin State Prison, home to California’s death row, since he was condemned to death in March 2005. That followed his conviction in November 2004 during a trial that was moved 90 miles (145 kilometers) to San Mateo County because of worldwide publicity.

But Massullo said he couldn’t stay on death row once prosecutors said they would not again seek his execution. He was moved to the county jail for resentencing and is expected to remain there until Massullo decides on whether he should get a new trial.

She plans about a weeklong hearing from Feb. 25 through March 4 to hear defense claims that the woman known as Juror 7 falsely answered questions during the selection process.

They say she actively sought to join the jury and later co-authored a book on the case.

Massullo will have 90 days after next year’s hearing to decide if Peterson should get a new trial.

Prosecutors say Peterson took his wife’s body from their Modesto home on Christmas Eve 2002 and dumped her from his fishing boat into the San Francisco Bay, where they washed ashore in April 2003.

Supreme Court justices said in their August 2020 decision overturning his death sentence that there was considerable circumstantial evidence incriminating Peterson in the first-degree murder of Laci and the second-degree murder of Connor.

It included that the bodies washed ashore near where Peterson admitted he was fishing on the day they disappeared. He had researched ocean currents, bought a boat without telling anyone, and couldn’t explain what type of fish he was trying to catch that day.

Also, in the weeks after Laci disappeared but before the bodies washed ashore, he sold his wife’s car, looked into selling their house, and turned the baby nursery into a storage room.

Peterson was eventually arrested after Amber Frey, a massage therapist living in Fresno, told police that they had begun dating a month before his wife’s death, but that he had told her his wife was dead.