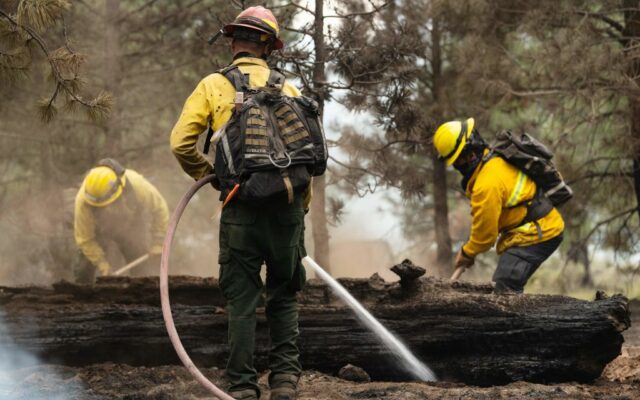 Fire crews do mop up work in Division Echo Echo of the Bootleg Fire in their efforts to fight the blaze on July 25, 2021 in the Fremont-Winema National Forest of Oregon. - the "Bootleg Fire" in Oregon, which started on July 6, 2021 near Beatty, Oregon, has burned in the space of two weeks the equivalent of the city of Los Angeles in vegetation and forests. (Photo by Mathieu Lewis-Rolland / AFP) (Photo by MATHIEU LEWIS-ROLLAND/AFP via Getty Images)

An Oregon scientist is trying to find out how to save wine harvests, from wildfires.

The chemistry of wine: has the flavors we enjoy. “Red fruit.  They’re tasting banana or green apple or honey or grassy or bell pepper.”

But wildfires can create those we don’t like.  “The first one being ash.  This is just kind of straight up tasting ash.  It’s a very aggressive and kind of gross flavor to me.”

Dr. Cole Cerrato with OSU’s Food Science and Technology describes how he’s tinkering with grapes, to figure out what wildfires do to wine, and eventually how to help save valuable harvests.

As wildfires become more common, both in the Pacific Northwest and worldwide, he says it’s going to be more crucial to find answers to save valuable harvests.