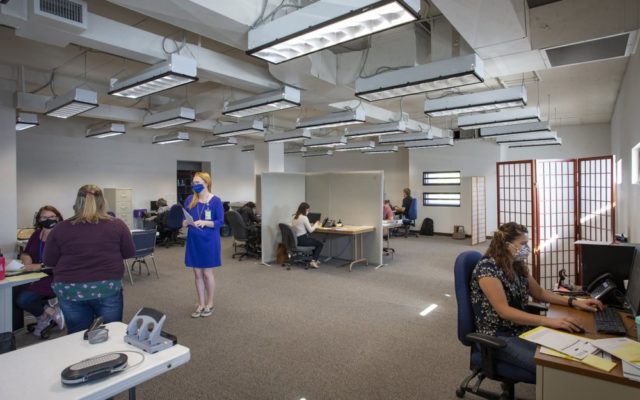 SALEM, Ore. (AP) — Heather Griggs presses a phone to her ear in a makeshift office in the small brick courthouse that once served as a jail in rural Pendleton, a place best known for its annual rodeo.

Her assured tone masks her exhaustion when she tells the person on the other end that they may have been exposed to COVID-19. It’s a call she has made thousands of times since March, but lately there has been a heightened sense of urgency.

The coronavirus has torn through the small Oregon community where farmers grow crops such as potatoes, onions and grains. In Umatilla County, where Pendleton is located, the rate of people testing positive for COVID-19 is about 16%. That’s a measure of how widespread the disease is in the community, and the World Health Organization recommends it stay below 5%.

In the county with a population of 77,000, the virus has infected more than a thousand people and killed nine, overwhelming its limited resources and employees.

The pandemic sweeping through major U.S. cities is now wreaking havoc on rural communities, with some recording the nation’s most new confirmed cases per capita in the past two weeks. The virus is infecting thousands of often impoverished rural residents every day, swamping struggling health care systems and piling responsibility on government workers who often perform multiple jobs they never signed up for.

Officials attribute much of the spread in rural America to outbreaks in workplaces, living facilities and social gatherings. Food processing plants and farms, where people typically work in cramped quarters, have proven to be hot spots.

Umatilla County has Oregon’s highest number of confirmed infections per capita, sometimes reporting a figure this month above that of Multnomah County, which is 10 times larger and includes Portland. The surge in Umatilla and most of Oregon’s rural counties is driving the state’s rise in confirmed cases.

In response to the pandemic, Umatilla County divided virus-related tasks among the 30-person public health department.

For Griggs, that meant her role supervising the agency’s maternal-child section turned into contact tracing and investigating. She spends her days asking people with positive test results about those they interacted with and then calling to warn those people.

“We are a small county, so I don’t think there is a single person here at public health who hasn’t been involved in some way,” said Griggs, who works with eight other contact tracers.