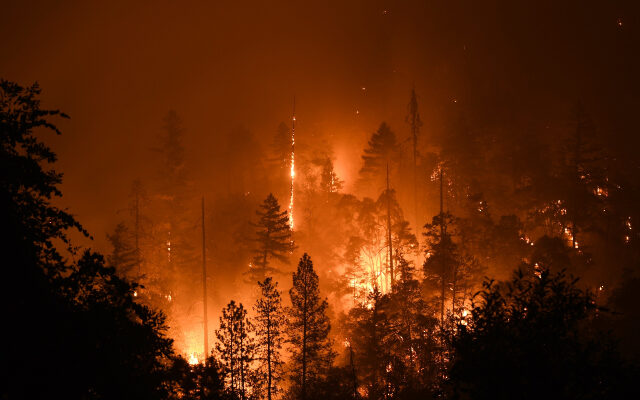 The blaze has burned about 20 square miles (52 square kilometers) since it was sparked by lightning Aug. 17 and was pushed by wind. The fire is burning on both sides of the Rogue River and is threatening houses and other structures in the towns of Galice and Rand.

One home and two structures have been destroyed. Firefighters on Wednesday worked in locations where fire crossed lines that were built on the blaze’s eastern edge.

“This is rough country,” said Joe Hessel, incident commander for Oregon Department of Forestry Team 1. “Every foot, every chain, every mile of line we complete is a big deal.”

Firefighters have also been working to protect structures by clearing flammable materials from roofs and yards, installing sprinklers and other measures.

Heavy smoke stopped water drops by air on the east side of the blaze on Wednesday, officials said.

Mandatory evacuation notices remain in place for nearby residents while others have been told to get ready and be set to leave. Thousands of structures remain at risk, officials have said. An Air Quality Advisory continues through Thursday for Jackson, Josephine, and Curry counties because of smoke from the fire.

This is video of a spot fire that sparked last night on the #RumCreekFire. It shows just how active the fire behavior was overnight.

Our office is posting fire updates to https://t.co/k3K8ZQ2CdP as we get them.