Riots Break Out In The City Of Roses, Curfew Declared 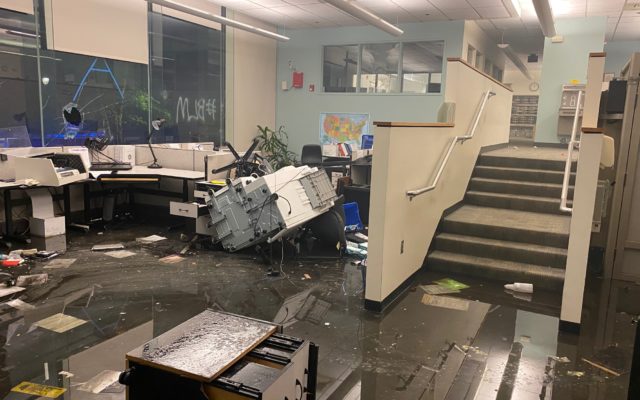 This all comes following the death of George Floyd while in police custody in Minneapolis, Minnesota.  One of the four officers involved in his death has been arrested and charged with 3rd degree murder.

I, Ted Wheeler, Mayor of the City of Portland, Oregon, by the authority vested in me by the Charter of the City of Portland and applicable code and statutes, issue the following Executive Order: On May 25, 2020, George Floyd died while in custody of the Minneapolis Police Department. Since Mr. Floyd’s death, thousands of Americans and Portlanders have expressed their frustration in a peaceful and constructive manner. Demonstrators have gathered in many cities to protest Mr. Floyd’s death. Peaceful demonstrations are essential to our democratic system. Unfortunately, some individuals have engaged in unlawful and dangerous activity,  including arson, rioting, looting, and damaging public and private property. These activities threaten the safety of lawful demonstrators, the surrounding communities, and first responders.

For these reasons, I order as follows:

1. A State of Emergency exists within the City of Portland under Portland City Code Section
15.04.

3. Travel Prohibited. During the curfew, all persons must not travel on any public street or in any public place.

4. Exemptions. All law enforcement, fire, medical personnel, and members of the news media are exempt from the curfew. Individuals traveling directly to and from work, seeking emergency care, fleeing dangerous circumstances, or experiencing homelessness are also exempt.

5. Definitions. a. For the purposes of this Executive Order, “travel” includes, without limitation, travel on foot, bicycle, skateboard, scooter, motorcycle, automobile, public transit, or any other mode of transporting a person from one location to another. b. For the purposes of this Executive Order, a “public place” is any place, whether on privately or publicly owned property, accessible to the general 3 public, including but not limited to public streets and roads, alleys, highways, driveways, sidewalks, parks, vacant lots, and unsupervised property.

6. Enforcement. I urge all Portlanders to voluntarily comply with this Executive Order. Pursuant to Portland City Code Section 15.08.040, enforcement of this Chapter may be by civil action as provided in ORS 30.315, or by criminal prosecution. In addition to any other penalty provided by law, refusal to obey an order issued under the authority of PCC 15.08.020 shall be punishable upon conviction by a fine of not more than $500 per occurrence. Any peace officer may issue a citation for violation of this Section.

Images of the damaged caused by rioting:

Saturday morning, Mayor Wheeler and other city and civic leaders spoke at a news conference.  Video courtesy of our news partner KGW.

As of 5 a.m. Saturday, Portland Police say 13 people are arrested in relation to the riot:

Portland Police say more were arrested after 5 a.m. but the names were not available at the time.

Follow the 8 a.m. press conference, Mayor Wheeler and others led media on a walking tour of the damage done.

Sarah Iannarone is a candidate for Portland Mayor and will face off with Mayor Wheeler in November’s general election.  She released a statement Saturday morning.

Today, Portland is grieving along with the rest of the nation after witnessing the disturbing murder of George Floyd. This is compounded by the killings of Ahmaud Arbery, Breonna Taylor, Atatiana Jefferson, and others. The sadness and outrage that emanates from communities across the country is not the result of one single video but rather 400 years of institutional racism and individual prejudice that have continued to oppress marginalized groups for generations.

Violence perpetrated by those who are supposed to ‘protect and serve’ is not confined to other municipalities; it occurs here in Portland regularly. These images remind us all of the deaths that have occurred in our city at the hands of the police such as Quanice Hayes, Terrell Johnson, Kendra James, Keaton Otis, Aaron Campbell, Andre Gladen, and too many more. These deaths must stop and should be the priority of our leaders.

Many of us woke up this morning to images of destruction in our own neighborhoods. This does not honor the victims nor reflect who we are as a community. This destruction must end. But for it to end we need visible leadership, de-escalation, actual local reforms, and a sense of community that has been crumbling in recent years. Thousands of Portlanders showed up in solidarity with communities of color, only a few dozen engaged in destructive activities. We cannot allow this fraction of protesters to distract us from the goal of achieving reforms here in Portland. I want to remind us all that Portland is strong. Portland is resilient. We will make it past one night of destruction by banding together to solve its root causes. Graffiti lasts for days; George Floyd is gone forever. Windows can be replaced; precious lives cannot.

Rioting in looting is not reflective of who we are. Yet, our community cannot begin healing until we address the problems of racism, police brutality, and white supremacy undergirding our city and society. We must dismantle the systems which uphold such atrocities and undermine accountability. I stand in solidarity with all Portlanders demanding justice in this case and others. In these challenging times, in which people have been grieving in isolation for so long, we must come together safely as a community and show that we are committed to tangible progress, not just platitudes and statements issued from on high.

Our community has everything we need to address these problems, but change is impossible without courageous, visionary leadership that believes in us. I recognize my privilege and commit to using it to the best of my ability to dismantle the racist conditions that have created so much pain from Portland to Minneapolis and beyond.

Yesterday, I showed up in solidarity with my neighbors at a vigil for victims of police violence. The event was powerful, inspiring, and I left the crowd humbled by the power of my community and driven more than ever to use the power of the Portland mayor’s office to redefine what public safety means and to ensure that all Portlanders can thrive in their daily lives without fear for their well-being.

Today, I am inviting other Portlanders to join me in volunteering to clean up our community. This morning I am cleaning graffiti from a black-owned business on Martin Luther King Jr Blvd. As I wash the pain from these walls, I am moved by a deep understanding that we must all do everything we can to fix this. We must join hand in hand to create a Portland that hasn’t existed yet, but which we believe can. It is important that we show that our Portland — from small business owners to activists, from elected leaders to essential workers — is committed to coming together to solve these problems. These times demand more than proclamations and platitudes; we must show up and put in the hard work.

Tomorrow, I will continue fighting for a fair police contract, police oversight with teeth, closing our racial income gap, addressing displacement and gentrification, and centering communities of color in this work. We must work to remove policies such as those in Minneapolis which led to this murder, change laws surrounding the use of force and double down on equity training of our officers. Black Lives Matter cannot just be a slogan for our elected officials. We will rebuild our community, we will reform our institutions, and we will come together to build a Portland that works for all.

We got this, Portland.

Portland Police say they continue investigating crimes that were committed. Anyone with information about individuals who committed criminal activity at any event is asked to share that information with the Portland Police Bureau. Information can be sent via email to [email protected].
For persons requiring anonymity, information may be submitted to Crime Stoppers of Oregon. Crime Stoppers of Oregon offers cash rewards of up to $2,500 cash for information, reported to Crime Stoppers, that leads to an arrest in any unsolved felony crime. Tipsters can remain anonymous.
Visit the App Store and download P3 Tips to submit secure and anonymous tips.
Online at https://www.p3tips.com/823
Call 503-823-HELP (4357)

“We know what sparked the original demonstration and we provided space for those who needed to express grief,” said Acting Chief Chris Davis. “The mass destruction we saw tonight in our City is unacceptable. Anger at the police is one thing; destroying our City is another. We know our community as a whole does not condone mass destruction. In the coming days, we will be increasing our police presence, leaning on our partners, and working with the community to restore safety.”