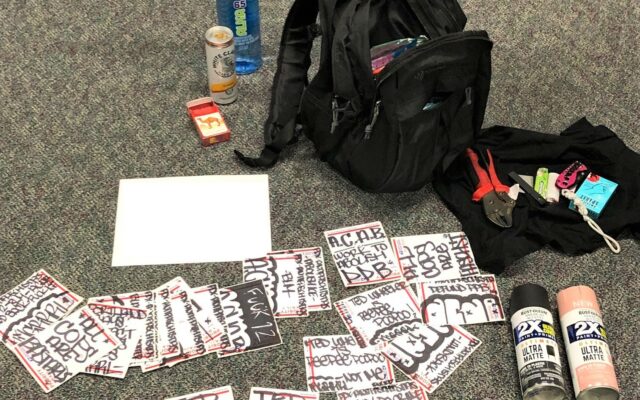 Portland Police say a march in the Northwest District became a riot when those in the march “began blocking streets, breaking windows, applying graffiti, and pushed their way into a restaurant.”

The group of about 75 people who were dressed mostly in all black began marching around 9:15.

Police say within 15 minutes reports of broken windows and graffiti came in.

According to police, “Some members of the group briefly forced their way into a tavern/restaurant in the 2200 block of Northwest Hoyt Street, then other participants followed them in and pulled them out.”

A man who was taking video of the march had a rock thrown though his window, according to police.

Police say that, “. Graffiti was applied on a Tri Met bus shelter and a Moroccan restaurant at Northwest 21st Avenue and Northwest Northrup Street.”

According to police “The group was advised via loudspeaker and Twitter (@portlandpolice) that the behavior of the crowd constituted a riot and they were advised to leave to the north.”

Police continue that, “Few if any of them complied. The group eventually wandered back into Couch Park and dispersed.”