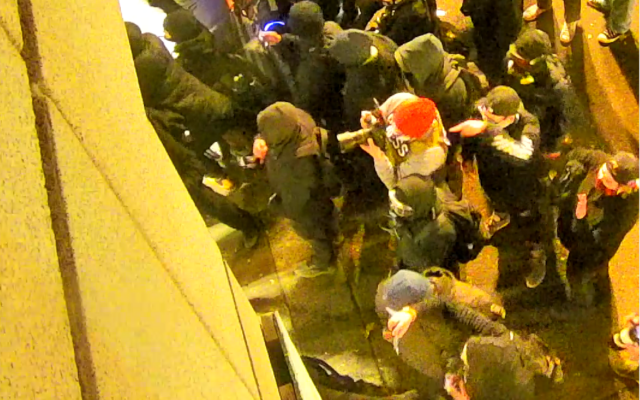 Portland, Ore. — The Multnomah County Sheriff’s office declared a riot Friday night after several people from a much larger group, attempted to break into the Justice Center.

The crowd gathered near Southwest 2nd and Madison in the 8 o’clock hour Friday night following the not guilty verdict in the Kyle Rittenhouse trial.  The Multnomah County Sheriff’s Office reports about 10 to 20 people from this group gained entry to a garage door at the Justice Center and started to walk into the building.

A Sheriff’s Office spokesperson says, “Deputies met the trespassers on the ramp to prevent entry and began instructing them to exit. The crowd, which was described as hostile, launched urine, alcoholic beverages, water bottles and batteries at deputies during the event. Because a large group of people were engaging in tumultuous and violent conduct, and further entry into the building would have posed significant implications and grave risk of causing public alarm, the Multnomah County Sheriff’s Office (MCSO) declared a riot. MCSO directed the Portland Police Bureau (PPB) incident command to communicate the riot declaration and force warnings to the demonstrators using the mobile Sound Truck. PPB issued the declarations and force warnings several times.”

Windows to the Multnomah County office building were busted out along with several other examples of vandalism in the area.  No word on any arrests.