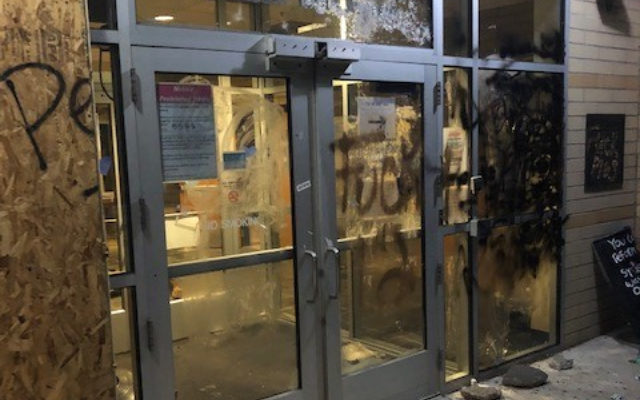 PORTLAND, Ore. — For the second straight night, police declared a protest on Portland’s east side a riot and arrested eight people.

A few hundred people blocked traffic as they marched from Floyd Light Park to the Portland Police Bureau’s East Precinct on Southeast 106th Avenue near Washington Street just after 9:00pm.  Many of them wore helmets and carried shields.

Some people blocked an entrance and began shining lasers and other lights at officers who were on the roof.  They spray-painted a security camera, tagged walls and tried breaking into the building.  One person tried to rip down a security camera.

An unlawful assembly was declared due to significant damage and fires being lit at the front doors.

Demonstrators continued to tamper with the front doors and tried to break windows.  They tore off boards and rammed heavy objects into the glass.  Eventually, the windows cracked and police say it caused significant damage.

A riot was declared when things escalated.

If you fail to comply with this lawful order you also may be subject to tear gas. Disperse immediately.

Items including fireworks, rocks and balloons full of paint were thrown at officers while trying to move the crowd away from the building.  Police say a truck associated with the group attempted to run over several officers.  Because of the concern for safety, police used tear gas and crowd control munitions to disperse the crowd.

Police dispersed the crowd on three more occasions after 11:00pm before the majority of the group left the area around 1:30am.