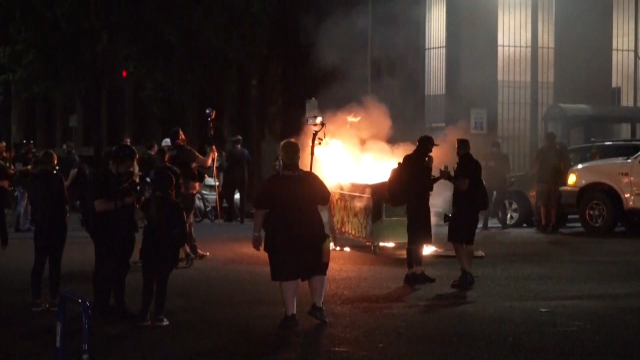 PORTLAND, Ore. — Portland Police declared a riot late Tuesday night after the Multnomah Building on Southeast Hawthorne Boulevard and Grand Avenue was vandalized and fires were set inside.  Two people were arrested.

Dumpsters were set on fire and one was pushed towards the side of the building, which houses county offices.  Rocks were thrown through windows and the building was sprayed with graffiti.

The group threw lit paper inside and sprayed lighter fluid through the offices.  During a live stream of the events, a person was seen piling burning material onto a desk.  A large burning object was thrown inside and started a fire big enough to set off the fire alarms and sprinklers.  As this point, police declared a riot.

.@PortlandPolice has declared the gathering near the Multnomah Building a riot after individuals vandalized, repeatedly smashed first floor windows with rocks and threw burning material into an office. https://t.co/PtByF6Gx6h

Officers were hit with items thrown by the crowd as they were dispersed using batons, crowd control munitions and pepper spray.  An officer was injured by a rock that was thrown at them.

The group marched back to Colonel Summers Park and left soon after 12:30am.

“The unprovoked actions by those who engaged in criminal behavior is reprehensible.  It is simply violence and serves no legitimate purpose. It does nothing to solve the issues our community faces,” said Multnomah County Sheriff Mike Reese.

I ask the community to work with us: support the critical work we do every day leading the public health response to COVID-19, providing thousands of meals to families in need, answering mental health crisis calls and serving those experiencing domestic violence.