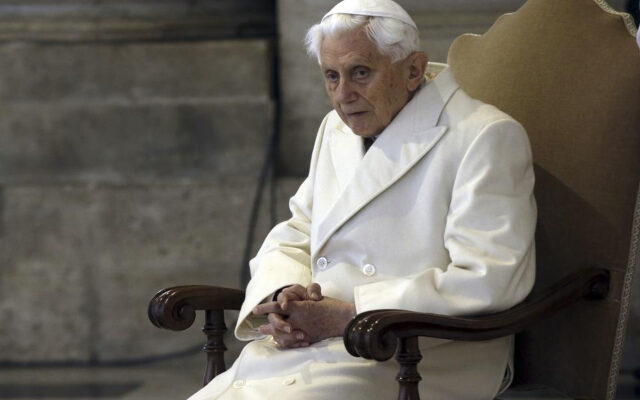 ROME (AP) — Retired Pope Benedict XVI asked forgiveness Tuesday for any “grievous faults” in his handling of clergy sex abuse cases, but denied any personal or specific wrongdoing after an independent report criticized his actions in four cases while he was archbishop of Munich, Germany.

Benedict’s lack of a personal apology or admission of guilt immediately riled sex abuse survivors, who said his response reflected the Catholic hierarchy’s “permanent” refusal to accept responsibility for the rape and sodomy of children by priests.

Benedict, 94, was responding to a Jan. 20 report from a German law firm that had been commissioned by the German Catholic Church to look into how cases of sexual abuse were handled in the Munich archdiocese between 1945 and 2019. Benedict, the former Cardinal Joseph Ratzinger, headed the archdiocese from 1977 to 1982.

The report faulted Benedict’s handling of four cases during his time as archbishop, accusing him of misconduct for having failed to restrict the ministry of the four priests even after they had been convicted criminally. The report also faulted his predecessors and successors, estimating there had been at least 497 abuse victims over the decades and at least 235 suspected perpetrators.

The Vatican on Tuesday released a letter that Benedict wrote to respond to the allegations, alongside a more technical reply from his lawyers who had provided an initial 82-page response to the law firm about his nearly five-year tenure in Munich.

The conclusion of Benedict’s lawyers was resolute: “As an archbishop, Cardinal Ratzinger was not involved in any cover-up of acts of abuse,” they wrote. They criticized the report’s authors for misinterpreting their submission, and asserted that they provided no evidence that Benedict was aware of the criminal history of any of the four priests.

Benedict’s response was more nuanced and spiritual, though he went on at length to thank his legal team before even addressing the allegations or the abuse victims.

“I have had great responsibilities in the Catholic Church,” Benedict said. “All the greater is my pain for the abuses and the errors that occurred in those different places during the time of my mandate.”

Benedict issued what he called a “confession,” though he didn’t confess to any specific fault. He recalled that daily Mass begins with believers confessing their sins and asking forgiveness even for“grievous faults.” Benedict noted that in his meetings with abuse victims while he was pope, “I have seen firsthand the effects of a most grievous fault.

“And I have come to understand that we ourselves are drawn into this grievous fault whenever we neglect it or fail to confront it with the necessary decisiveness and responsibility, as too often happened and continues to happen,” he wrote. “As in those meetings, once again I can only express to all the victims of sexual abuse my profound shame, my deep sorrow and my heartfelt request for forgiveness.”

His response drew swift criticism from Eckiger Tisch, a group representing German clergy abuse survivors, who said it fit into the church’s “permanent relativizing on matters of abuse — wrongdoing and mistakes took place, but no one takes concrete responsibility.”

Benedict “can’t bring himself simply to state that he is sorry not to have done more to protect the children entrusted to his church,” the group said.

The retired pope’s response will likely complicate efforts by German bishops to try to re-establish credibility with the faithful, whose demands for accountability have only increased after decades of abuse and cover-up.

The head of the German bishops conference, Limburg Bishop Georg Baetzing, had previously said that Benedict needed to respond to the report by distancing himself from his lawyers and advisers. “He must talk, and he must override his advisers and essentially say the simple sentence: ’I incurred guilt, I made mistakes and I apologize to those affected,’” Baetzing said.

But in a tweet Tuesday, Baetzing only noted that Benedict had responded.

”I am grateful to him for that and he deserves respect for it,” Baetzing wrote. The tweet didn’t address the substance of Benedict’s response.

The law firm report identified four cases in which Ratzinger was accused of misconduct in failing to act against abusers.

Two cases involved priests who offended while Ratzinger was archbishop and were punished by the German legal system but were kept in pastoral work without any limits on their ministry. A third case involved a cleric who was convicted by a court outside Germany but was put into service in Munich. The fourth case involved a convicted pedophile priest who was allowed to transfer to Munich in 1980, and was later put into ministry. In 1986, that priest received a suspended sentence for molesting a boy.

Benedict’s team had earlier clarified an initial “error” in their submission to the law firm that had insisted Ratzinger was not present at the 1980 meeting in which the priest’s transfer to Munich was discussed. Ratzinger was there, but the priest’s return to ministry was not discussed, they said.

Benedict said he was deeply hurt that the “oversight” about his presence at the 1980 meeting had been used to “cast doubt on my truthfulness, and even to label me a liar.” But he said he had been heartened by the support he had received.

“I am particularly grateful for the confidence, support and prayer that Pope Francis personally expressed to me,” he said.

The Vatican had already strongly defended Benedict’s record after the law firm report, recalling that Benedict was the first pope to meet with victims of abuse, that he had issued strong norms to punish priests who raped children and had directed the church to pursue a path of humility in seeking forgiveness for the crimes of its clerics.

The Vatican’s defense, however, focused primarily on Benedict’s tenure as head of the Holy See’s doctrine office and his eight-year papacy.

Benedict reflected on his legacy in his letter.

“Quite soon, I shall find myself before the final judge of my life,” he wrote. “Even though, as I look back on my long life, I can have great reason for fear and trembling, I am nonetheless of good cheer. For I trust firmly that the Lord is not only the just judge, but also the friend and brother who himself has already suffered for my shortcomings.”

Benedict’s response also rang hollow outside of Germany, with the U.S.-based survivor’s advocacy group, SNAP, accusing him of “repeating words of apology that have fallen on deaf ears for decades.”

And Mitchell Garabedian, the Boston attorney of “Spotlight” fame who has represented hundreds of abuse victims, said Benedict’s words re-victimized and insulted survivors.

“He’s a leader setting a poor example morally, and in the process he is encouraging further cover-up of clergy sexual abuse,” he said.

But Pope Francis’ top adviser on preventing abuse, Boston Cardinal Sean O’Malley, found in Benedict’s letter sincere “contrition for what has been lacking in his stewardship.”

“Benedict’s acknowledgement of the irreparable harm caused by sexual abuse in the church and of his own failings to do everything to prevent such harm is a challenge to all those who hold positions of leadership in the church,” O’Malley said. “We must do better.”