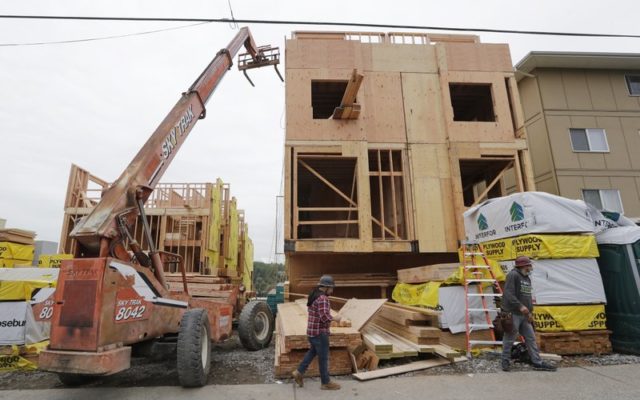 Portland, Ore. – Despite labor shortages, costly materials due to inflation, and supply chain issues – the Portland Metro Region is on track to hit a five-year record in rental construction. A report from RentCafe shows 8,476 new apartments are expected to hit the market by the end of this year, the 17th most in the entire U.S. 3,821 of these units are expected be built in Portland proper. This follows a larger trend in the U-S, as the country is likely to see the most rental units produced since 1972. The survey expects no less than 420,000 new rental units to be built nationwide.

Even with the issues listed above, there is money to be made. As more people migrate to the Northwest developers are incentivized to build more housing. But as it becomes more expensive to build, it seems a little shocking that Portland is creating rental units at a record pace.

Doug Ressler with Yardi property management says despite COVID-19 wrecking havoc on the construction industry, a number of factors have allowed building to continue because “developers are doing some quite creative things. In terms of nearshoring-onshoring, they’re extending contract duration times to be able to lock up more supply, they’re experimenting with proactively innovative technologies like modular construction, mass timber, light gauge steel, insulated concrete, things like that. So, they are trying to accommodate not only the delivery, but the cost aspect.”

As the industry struggles with labor shortages, innovation has been able to fill the gap to continue to produce enough rental units to keep up with massive growth in the region.

“Even though it’s a niche type thing, 3D printing where they’re doing extrusion to be able to put in housing. Materials are also being designed to be more labor efficient” (and require fewer workers).

The biggest driver behind this optimistic forecast, is a boom in the number of single family homes being developed for rent. Ressler says following the 2008 financial crisis, multifamily developers stepped in believing they could bring costs down on these types of rentals, as the market was typically dominated by mom-and-pop renters prior. As fewer Americans are able to afford a home, but still want a more traditional, suburban, American home, developers “can put a product on the market at a lower cost than what you would purchase a home for. In addition, as more millennial families are growing, it looks like a house but it rents,” Ressler said. Many of these rentals have 3 bedrooms and a yard. “Developers see an opportunity. And what you see is the economics of supply and demand, where developers think they can fit that market with a rental property,” he continued.

On top of more demand from consumers for these types of rentals, they have also become cost efficient for developers.

“You have to look at the cost of time, especially in zoning. The process of getting permission to get zoning can be long and costs money.” Ressler adds, The lengthy zoning process can sometimes turn some developers away from large apartment buildings, if they can quickly build single family homes instead.

Further, with strict zoning laws in Portland, developers are looking south in areas like Sherwood, Wilsonville and Canby, where the land and zoning fees are cheaper.

“It’s quite a large contingent of people in the industry adding multifamily homes to their portfolio, so that if you don’t have land or the space for land in terms of urban density cores, you can always have land proximity that’s on the urban or exurb peripheral and it is usually zoned and costs a little bit less. Plus you can put out a product that’s a little bit larger and at a price point where consumers can achieve a good rental option,” Ressler says.

The National Multifamily Housing Council looked at how much housing is needed across the U.S. by 2035, and currently the country has a shortfall of 4.3 million housing units. For the Portland region to keep up with demand, about 6,000 housing units need to be built every year.

“That’s feasible,” according to Ressler. “That number is well within the cost structure of what’s happening in the Portland area. You see a very positive inbound migration that’s occurring in Portland.”