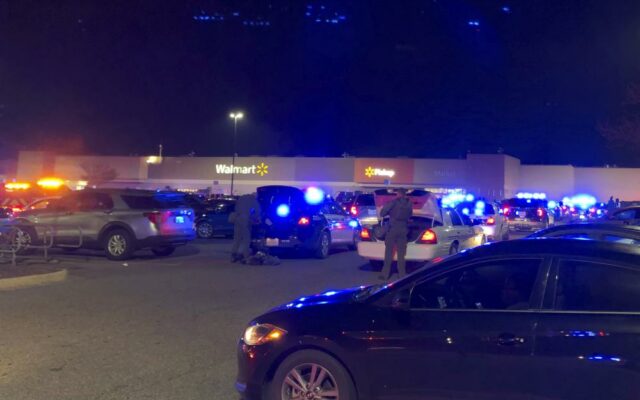 In this image taken from video, police respond to the scene of a fatal shooting at a Walmart on Tuesday night, Nov. 22, 2022, in Chesapeake, Va. (WAVY-TV 10 via AP)

With precious seconds on the line, officers are trying to respond to both real and fake calls about shootings.

There hasn’t been a single week so far in 2022 without a mass shooting, including yesterday’s incident at a Walmart in Virginia where six people died.

And recently, five people were killed at an LGBTQ club in Colorado.

But officers are also responding to lots of false alarms.  Last night at Oregon State University, an alert went out about an active threat situation.  Then a message followed shortly after saying the situation was resolved and safe.

And officers in several counties in Washington state responded to recent false calls about shootings: including one claiming there was a school shooting in Clark County, where Sergeant Chris Skidmore tells us,  “They claimed there was a teacher inside the school and that several students had been shot.”

Making a false call like that’s a crime,  called “swatting” and could result in ten years in prison.