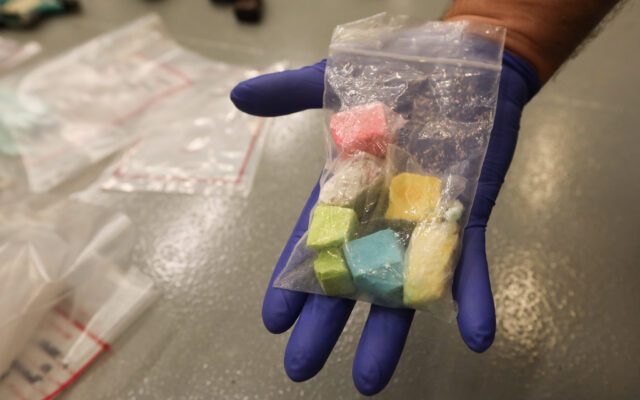 PORTLAND, Ore. – A new form of fentanyl has been found in Multnomah County.

During a search of a Northeast Portland home, Rainbow Fentanyl was discovered.

The powerful, powdered drug gets its name from its multi-colored sidewalk chalk-like appearance.

And it’s because of that appearance, police are worried about children trying it.

“We are partnering with Multnomah County health departments to sound the alarm,” SIU Sergeant Matt Ferguson said. “The public needs to be aware of the rising use of powdered fentanyl. We believe this is going to be the new trend seen on the streets of Portland.”

The following statement is on behalf of Multnomah County health departments:

It only takes 2 milligrams of fentanyl — about the weight of a few grains of salt — to cause a fatal overdose. Health officials last year began sounding the alarm after cheap, counterfeit opioid pills containing fentanyl began fueling an increase in fatal drug overdoses across the Portland Metro region.

According to the Oregon-Idaho HIDTA 2023 Threat Assessment, non-medical grade fentanyl has overtaken heroin and methamphetamine as the number one threat in our region. And because it is not medical-grade, it is difficult to determine potency and accurate dosing.

The rising use of powdered fentanyl and the brightly colored variations is cause for concern. Fentanyl in powder form generally has a higher potency than other forms of fentanyl. The colorful fentanyl powders are new to most law enforcement agencies. Providers in recovery treatment also report being unfamiliar with the new form of fentanyl.

Julie Dodge, interim director of Behavioral Health for Multnomah County said it’s not uncommon for drug forms to shift over time. That’s why the main message always has to be, we take a risk any time we take a substance that we don’t know who made it, and when there’s no quality control,” she said.

“We are seeing more powdered fentanyl that is dyed in various colors. The strength can vary but is typically stronger than pressed pills,” said Harm Reduction Supervisor Kelsi Junge. “Anyone that intends to use powdered fentanyl should follow principles of harm reduction by going slow, not using when you are alone and ensuring that someone has narcan.”

People who choose to use drugs outside of a care plan developed with a healthcare provider should take steps to reduce the risk of overdose. Don’t use alone, in case you or someone you’re with starts to overdose. Signs of overdose include:

Naloxone, a medication that counteracts the effects of opioids, can reverse an overdose. Oregon’s Good Samaritan Law will protect both the person who administers naloxone and the person who is overdosing from prosecution.

Anyone who uses illicit drugs can get free fentanyl test strips and naloxone kits through Multnomah County Harm Reduction. Learn more at multco.us/harmreduction. A person can test a pill with a fentanyl strip before consuming.