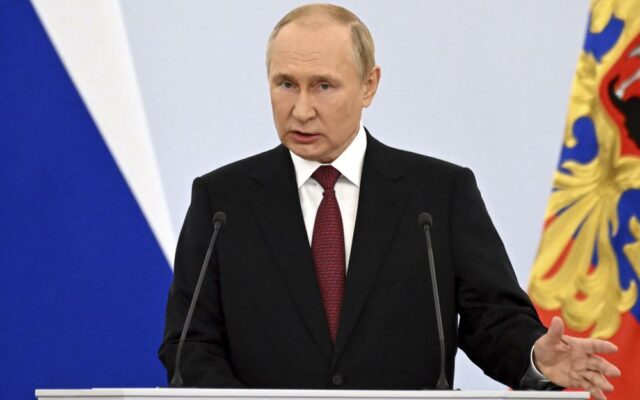 Russian President Vladimir Putin speaks during celebrations marking the incorporation of regions of Ukraine to join Russia, in Red Square in Moscow, Russia, Friday, Sept. 30, 2022. The signing of the treaties making the four regions part of Russia follows the completion of the Kremlin-orchestrated "referendums." (Gavriil Grigorov, Sputnik, Kremlin Pool Photo via AP)

MOSCOW (AP) – Russian President Vladimir Putin has denied having any intentions of using nuclear weapons in Ukraine but described the conflict there as part of alleged efforts by the West to secure its global domination.

Speaking to international policy experts on Thursday, Putin accused the U.S. and its allies of trying to dictate terms to other nations in a “dangerous and bloody” domination game.

Putin, who sent his troops into Ukraine on Feb. 24, claimed that “humankind now faces a choice: accumulate a load of problems that will inevitably crush us all or try to find solutions that may not be ideal.”