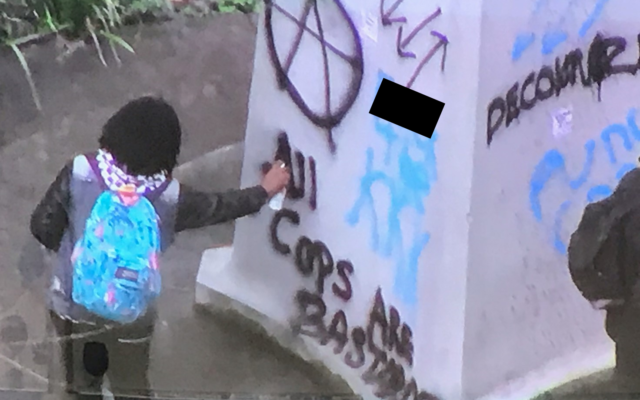 Portland, Ore – Portland police are still trying to find a fourth vandalism suspect they connect to the mahem that erupted in a protest this weekend. They’ve already made several other arrests.

Portland Police Lieutenant Tina Jones says officers had to step in when it turned violent.

“We did not want to insert the police to be the target or focus. We would rather have people come in and peacefully demonstrate which is the goal. Unfortunately there was a few select individuals who decided to engage in criminal behavior,” Lt. Jones said.

Police tweeted early Saturday that the KKK’s planned rally was cancelled. Even so, Rose City Antifa and other counter-protesters showed up at Lownsdale Square Park Saturday morning and demonstrated for about four hours, peacefully at first. But police say then some people began acting in a violent and threatening manner against others who were taking pictures or videos.

A driver hit a pedestrian at SW 2nd Avenue and Madison Street during the demonstration, but the injuries are not life threatening.