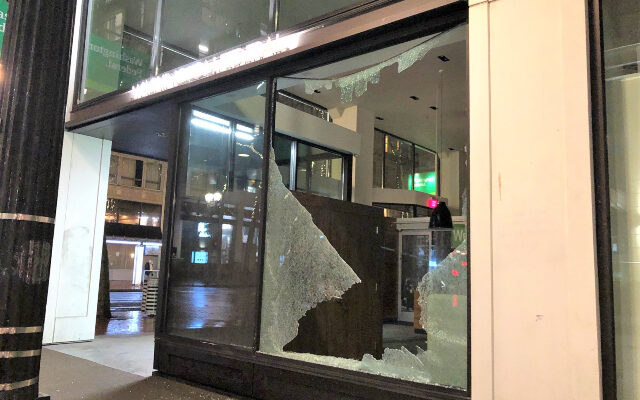 PORTLAND, Ore. — What started as a protest about injustice, ended with smashed windows and damaged businesses in downtown Portland overnight.

Protesters marched from Chapman Square Park, to the Portland Police Bureau’s Central Precinct. Some sprayed graffiti on the building.

Next demonstrators went to the new Multnomah County Courthouse, where someone tried to break through security fencing. They broke a window at the courthouse, and police announced a warning.

Later, some broke windows and damaged businesses near S.W. 10th and Morrison, including the Union Bank Tower, the Virginia Cafe, and a Target Store.   Police say they announced that because of the vandalism, the gathering was an unlawful assembly, and most of the crowd left by about 11:30 last night.

Police are asking for information about who’s responsible for the vandalism, and whether it impacted other businesses as well. They did not use force or tear gas, and have not yet announced any arrests. They did make four arrests after another protest around the East Precinct the night before.