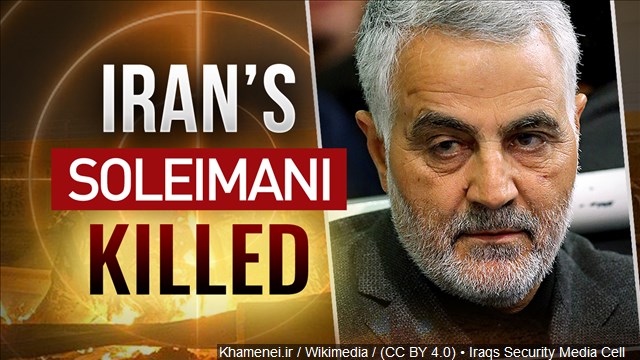 Two top Senate Democrats are calling on President Donald Trump to immediately declassify the administration’s reasoning for the deadly strike on an Iranian official. Senate Minority Leader Chuck Schumer and the Senate Foreign Relation Committee’s Sen. Robert Menendez say there’s “no legitimate justification” for keeping the information from the public. Schumer and Menendez say in a Monday letter to Trump the White House’s classified notification sent to Congress Saturday under the War Powers Act was insufficient. Trump has warned the U.S. will levy harsh sanctions if Iraq expels American troops in retaliation for the strike in Baghdad that killed Gen. Qassem Soleimani. Iran has vowed to retaliate.   Major Bob Bevelaqua  a former Green Beret and military expert tells FM News 101 KXL

The U.S. Should have taken out General Soleimani a long time ago.  He’s concerned that Iranians will leave military members alone but will attack softer targets instead. he describes soft targets as civilians in less protected areas.  The idea is to make Americans worry.

President Donald Trump declared Friday that a “reign of terror is over” as he marked the death of an Iranian general killed in a U.S. strike and as the Pentagon scrambled to reinforce the American military presence in the Middle East in preparation for reprisals.

Gen. Qassem Soleimani “made the death of innocent people his sick passion,” Trump said from his estate in Palm Beach, Florida, adding “a lot of lives would have been saved” if he’d been hunted down years ago.

The United States is sending nearly 3,000 more Army troops to the Mideast in the volatile aftermath of the killing ordered by Trump, defense officials said.

Also Friday, the Pentagon placed an Army brigade in Italy on alert to fly into Lebanon if needed to protect the American Embassy there, part of a series of military moves to protect U.S. interests in the Middle East. Speaking on condition of anonymity, an official said the U.S. could send 130 to more than 700 troops to Beirut from Italy. The official was not authorized to be identified.

Reinforcements were ordered as U.S. officials said they had compelling intelligence that Soleimani, the commander of Iran’s Quds Force who was killed in the U.S. strike, was planning a significant campaign of violence against the United States.

Officials, who spoke on condition of anonymity to discuss a decision not yet announced by the Pentagon, said the new contingent of troops is from the 82nd Airborne Division at Fort Bragg, North Carolina. They are in addition to about 700 soldiers from the 82nd Airborne who deployed to Kuwait earlier this week after the storming of the U.S. Embassy compound in Baghdad by Iran-backed militiamen and their supporters.

Trump said of Soleimani: “We take comfort in knowing that his reign of terror is over.”

But the dispatching of extra troops reflects concern about potential Iranian retaliatory action for the killing. It also runs counter to Trump’s repeated push to extract the United States from Mideast conflicts. Prior to this week’s troop deployments, the administration had sent 14,000 additional troops to the Mideast since May, when it first publicly claimed Iran was planning attacks on U.S. interests.

The reinforcements took shape as Trump gave his first comments on the strike, declaring that he ordered the killing of Soleimani because he had killed and wounded many Americans over the years and was plotting to kill many more. “He should have been taken out many years ago,” he added.

The strike marked a major escalation in the conflict between Washington and Iran, as Iran vowed “harsh retaliation” for the killing of the senior military leader. The two nations have faced repeated crises since Trump withdrew from the 2015 nuclear deal and imposed crippling sanctions.

The United States urged its citizens to leave Iraq “immediately” as fears mounted that the strike and any retaliation by Iran could ignite a conflict that engulfs the region.

Secretary of State Mike Pompeo defended the strike as “wholly lawful,” saying that Soleimani posed an “imminent” threat against the U.S. and its interests in the region.

“There was an imminent attack,” Pompeo told Fox News. “The orchestrator, the primary motivator for the attack, was Qassem Soleimani.”

The White House did not inform lawmakers before the strike. It was expected to give classified briefings to members of Congress and staff in the afternoon. Defense Secretary Mark Esper notified House Speaker Nancy Pelosi of the strike shortly before the Pentagon confirmed it publicly.

Pompeo called world leaders Friday to explain and defend Trump’s decision to order the airstrike that has sparked fears of an explosion of anti-American protests as well as more violence in the already unstable Middle East.

In his calls with the British and German foreign ministers as well as China’s state councilor, Pompeo stressed that Trump acted to counter an imminent threat to U.S. lives in the region but also that the U.S. is committed to “de-escalation” of tensions, according to the department’s summaries of the conversations.

De-escalation was not mentioned in the department’s summary of his call with the French foreign minister, nor in his calls with Afghanistan’s President Ashraf Ghani or the Pakistani military chief of staff. In those calls Pompeo “underscored the Iranian regime’s destabilizing actions through the region and the Trump Administration’s resolve in protecting American interests, personnel, facilities and partners,” the department said.

Trump opted not to play a round of golf on Friday, and he was not expected to be seen publicly until he travels to Miami for an afternoon event for his reelection campaign.