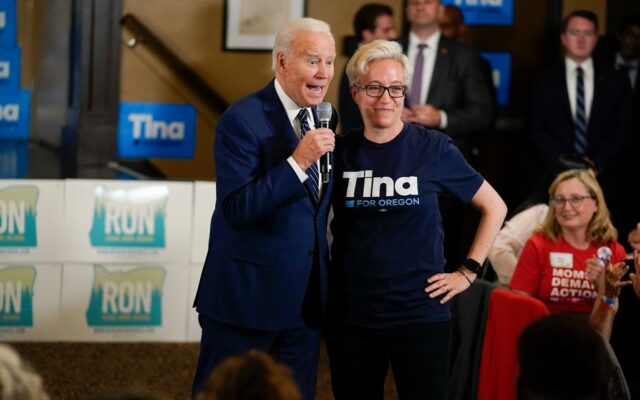 President Joe Biden stands with Tina Kotek, the Oregon Democratic nominee for governor, as he speaks during a grassroots volunteer event with the Oregon Democrats at the SEIU Local 49 in Portland, Ore. Friday, Oct. 14, 2022. (AP Photo/Carolyn Kaster)

PORTLAND, Ore. – For the second time this year, President Biden is in Portland. This time, to do what he can to help Tina Kotek in her bid for Oregon Governor.

Biden was last in Portland back in April, mainly speaking on infrastructure investments, particularly at the Portland International Airport (PDX).

Biden touched down at PDX just after 6 pm, and was greeted on the tarmac by both Oregon Senator Jeff Merkley, as well as Representative Suzanne Bonamici, even giving Bonamici a cupcake for her birthday.

With election day now under a month away, Biden is in town to drum up support for Democratic candidate for Oregon Governor, Tina Kotek. Merkley and Bonamici rode with the President in his Cadillac limousine nicknamed “The Beast”, and the group headed south on I-205 to the SEIU Local 49 at SE 26th and Powell shortly after 7 pm, where volunteers were phone banking for Kotek. He came with Sesame Donuts in hand.

“This is the most important off-year election since Roosevelt,” Biden told the crowd. “What happens in the next 4-6 years is going to determine what happens for the next three or four generations. Not just America, but across the world.”

The President reiterated his work to lower costs to American families, giving examples of attempting to lower prescription medication costs, as well as cap insulin prices.

“So much is at stake if we are able to keep the House and keep the Senate,” he said. “We can continue to do the things that we’ve been doing, which are really going to change the country.”

Kotek’s opponents in next months election each took to social media with the President’s visit. Christine Drazan wrote on twitter “Oregonians are tired of status quo politicians like Tina Kotek and Kate Brown, who have made life worse for families across this state. Bringing in a failing president isn’t going to save a failing candidate.” while non-affiliated Betsy Johnson thanks President Biden for his visit to Portland. “Every time you do, Tina’s tent cities get cleaned up a little bit more.”

President Biden is expected to appear at another event Saturday at noon at the East Portland Community Center, then a reception with Kotek at 1:45, before flying out at PDX at 2:50 to return to Delaware.