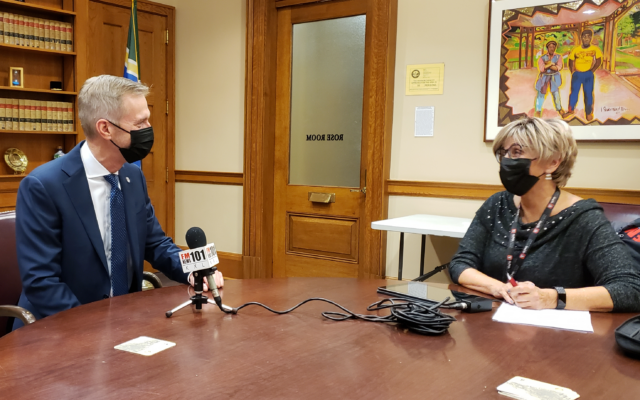 PORTLAND, Ore. — Mayor Ted Wheeler talked with KXL Reporter Rosemary Reynolds about the record amount of homicides and shootings in Portland this year; 72 homicides and well over 1,000 shootings.  The mayor is well aware that people are tired of him saying the same old thing all the time.  They want the crime to go away.

The Mayor says: “The Portland Police Bureau is critically understaffed.  I want us to have an evidence based approach.  By that I mean what do we really have to have staffing wise?  Call response times, different types of criminal activity and when those events happen.”  Mayor Wheeler has tasked Community Safety Director Mike Myers to work with Police Chief Chuck Lovell on a 5-year staffing plan based on evidence.

In the near term, the Mayor is asking his colleagues to look at a “Retire-Rehire” program.  In the next couple of weeks, during the fall budget process, the city wants to immediately bring back officers that recently retired.

“The advantage is there won’t be a 2 year training and certification process,” says Mayor Wheeler.

Police Chief Chuck Lovell indicates the city needs 300 officers over 3 years.  Commissioner Mingus Mapps has said the same thing.  Executive Director of the Portland Police Association Daryl Turner has commented in the past that number needs to be closer to 1,800 to accommodate population growth.

Mayor Wheeler says “As Police Commissioner, what I know is I need cops on the street right now.”  He wants 25 officers to hit the streets.  He plans to announce that soon along with the purchase of body cameras.

Last March, Mayor Wheeler introduced the Focused Intervention Team, similar to the Gun Violence Reduction Team, to address the shortcomings by multiple audits suggesting there was a lack of accountability, a lack of transparency and disproportionality on how that work was done.  When asked about the entire City Council voting to fund GVRT in February 2020 and then four months later labeling them “evil, racist, and ineffective”; the Mayor’s response was: “I never thought that.”

On the subject of having officers backs’, the Mayor says, “I’ve been visiting with groups of them”.  When asked if officers on the streets really feel his support, he said: “Their jobs are incredibly hard and I appreciate them.”